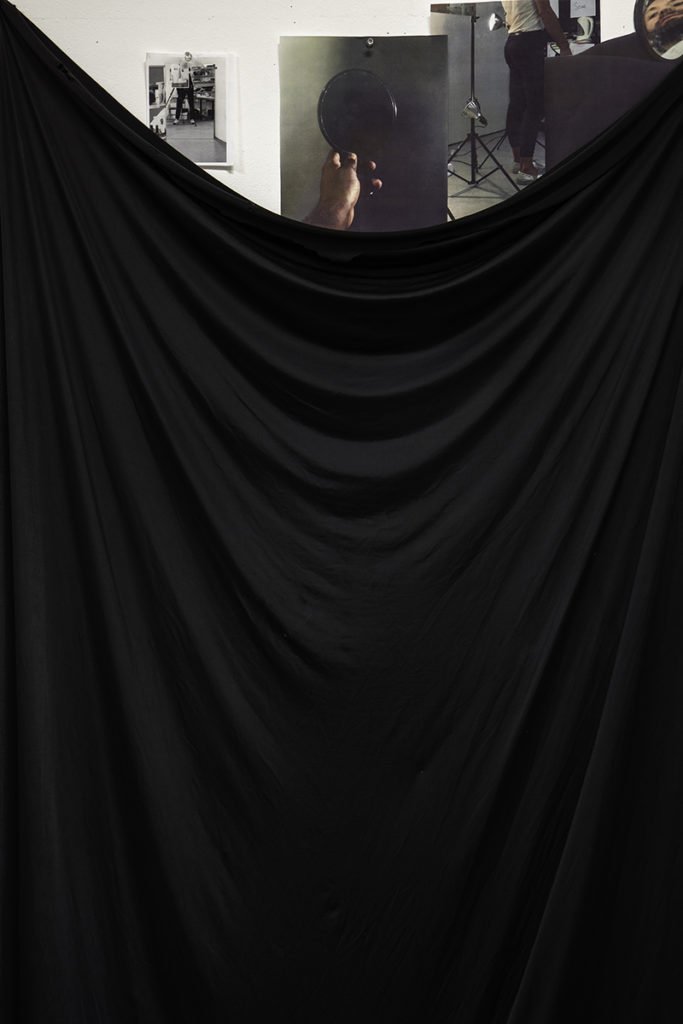 I first encountered Paul Mpagi Sepuya’s work when I walked into his 2017 solo exhibition at Yancey Richardson Gallery in New York City.  I didn’t so much view his pictures as I did stare at them, trying to reconcile the spatial constructions, to untangle the delicate knots of reference and self-reference, seeking to decode anonymous flesh of male forms, and trying to figure out where any given picture starts or ends; seeing the picture frames as more interruptions then boundaries. Without realizing it,  I ended up pacing in loops around the gallery space.  It must have lasted a half hour at least, trying to calculate Sepuya’s complex visual maths. Figures, Grounds And Studies put me into a trance that I still haven’t quite escaped from. I reached out to find insight into the inner machinations of his work, a Mobius Strip of photographic representation.

Gregory Eddi Jones: I’ve been going back and forth about how to start this interview. I find the images you make incredibly rich, and because they contain so many points of entry in meaning and dialogue it wouldn’t quite seem right to simply barge into any single one of them. So I figure I’d start by asking about your origins as a photographer and see where that leads. You began strictly as a portrait photographer, right? Could you guide us through some of the early influences that helped to shape the path you now find yourself on?

I began making portraits in two concurrent projects in 2005, shortly after I finished my undergrad in 2004 at NYU’s Tisch School of the Arts: one that developed alongside new creative and sometimes physical friendships within a circle of mostly gay male friends, which would become known as Beloved Object and Amorous Subject; and another documenting the re-connection with extended family in the South and Denmark. The link was in the faith that photography offered a clear and gratifying confirmation of “knowing” a subject, a fiction of having mastered or affixed and understanding of a relationship. The work since 2007 has been about the complications that have in fact arisen from that misunderstanding, and the production, dissemination, and use of portraiture or portrait-based work, or that which plays with the structure of queer social relationships. 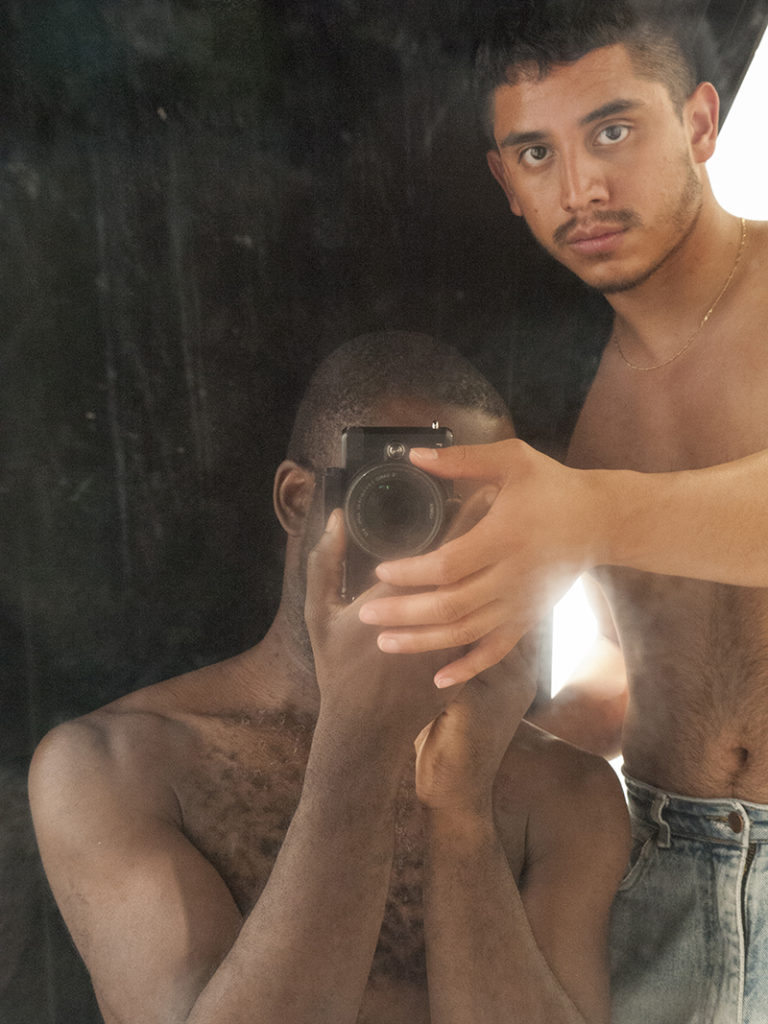 g: I love that idea of using portraiture to “know” a subject, or in a sense, creating a record of a relationship, a sort of photographic “fixing” of personal and emotional memory. It seems that your work is just as much a personal social exercise as it is a creative one. And in that sense, how do you see yourself negotiating the gap of understanding that occurs when the subjects you photograph, and the resulting images, contain a certain meaning and remembrance for you that isn’t necessarily accessible to a wider audience?

P: I don’t worry about it at all. I enjoy the privilege that personal connectedness offers as *additional* layers of meaning. It’s fun, but biography can’t be the crutch of an artist, and I agree with author Jeanette Winterson when she argues that the task of the artist is to overcome biography, to work with the material in innovative and meaningful ways through form. So what I hope for is not that any viewer *outside* know anyone on the *inside* or even that we substitute pictures and portraits for our own knowledge of each other. What I do hope for is that the work is formally and conceptually open, accessible and challenging for viewers and leads them to think about the structures of photography, portraiture, and of queer sociality in new ways. 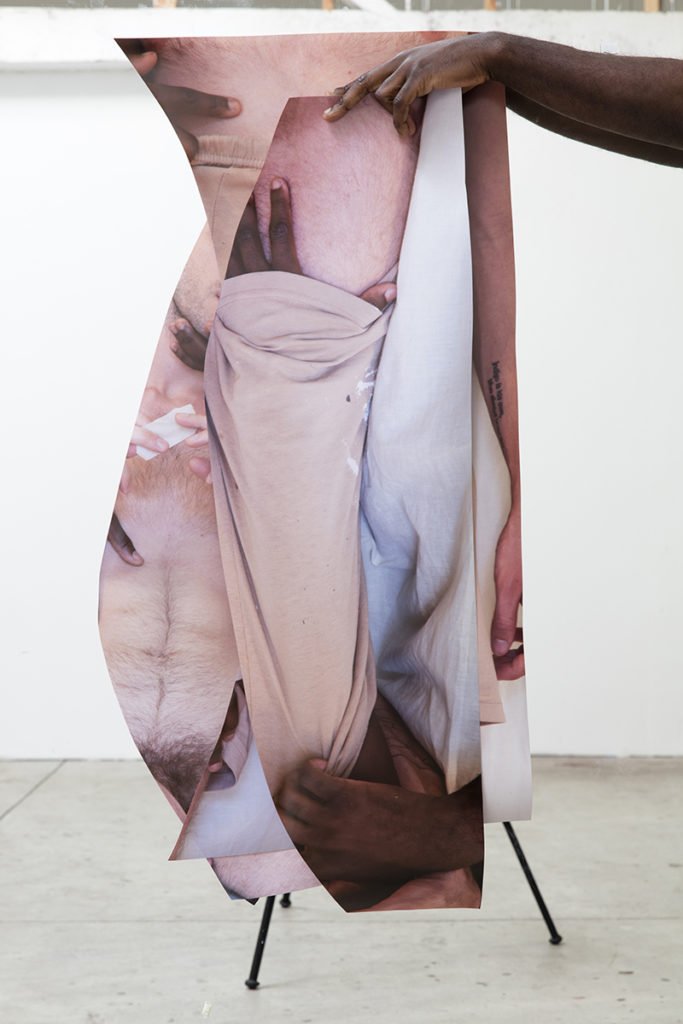 g. There’s been so much written on your explorations of visual space construction in your pictures, and I want to touch on that soon. But I want to push a little further for a peek behind the curtain of the imagery, not necessarily towards the personal relationships you share with your subjects but perhaps the foundations of influence on the themes of queer sociality, which I would note is the note you left off on at the end of each previous response here so far. Are there particular artistic or philosophical queer traditions you see yourself participating within? Or are there conversations that you are looking to draw upon in the scope cultural, rather than personal identity?

But within art, I think about queer modernism in the texts of Richard Bruce Nugent and Virginia Woolf, the stylized creation of Truman Capote’s self-portraits, the peer-to-peer and studio mail-order communities sharing homoerotic photographs and magazines, and all that… 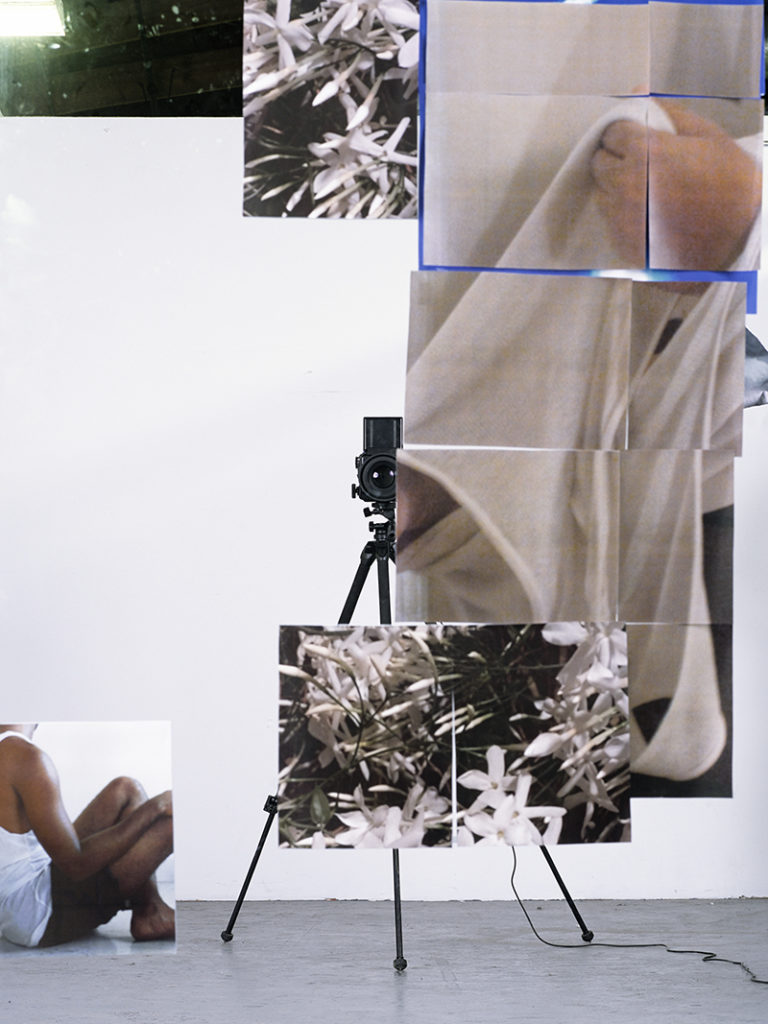 g. There is a lot of playfulness in your work, and a lovely sense of invention in your layering of imagery and manipulating the spacial planes of your pictures. Often the surfaces of your photographs defer to the surfaces of other pictures within the frame, and you imbue many of your finalized photographs with a self-consciousness of pictorialist thought in this way.

There is something of a teasing I see you do as well. Sometimes your final images feel like realized art objects, other times they seem more to serve as documents of performance and sculpture, or as a means of cementing relational memory, or as fields in which a small curation of other pictures become free to mingle amongst themselves. Your results speak in close conversation and circle like an Ouroboros entering into itself over and over again.

What gets to me is that nothing seems scripted, everything a product of improvisation within the studio environment. Tell me if I’m reading too far into these, but your pictures very much seem to be an organic meeting place for many different passions. Maybe the art making is more an excuse to put everything you love into one place?

P. Yes that seems like an apt way to put it. Artmaking – the photographs and their production – does allow for a bringing together of many ideas, people, pictures.

But pictorialism is something that I would push against. Although many of the images are created with some form of collage or playing with of surfaces, which may at first suggest pictorial effects, the concerns present in the work are specific to photography and not caught up in the pictorial anxiety about an art vs photography hierarchy or dichotomy. Nothing is for “artsy” effect, and everything is for exploring what photographs uniquely and assuredly do. 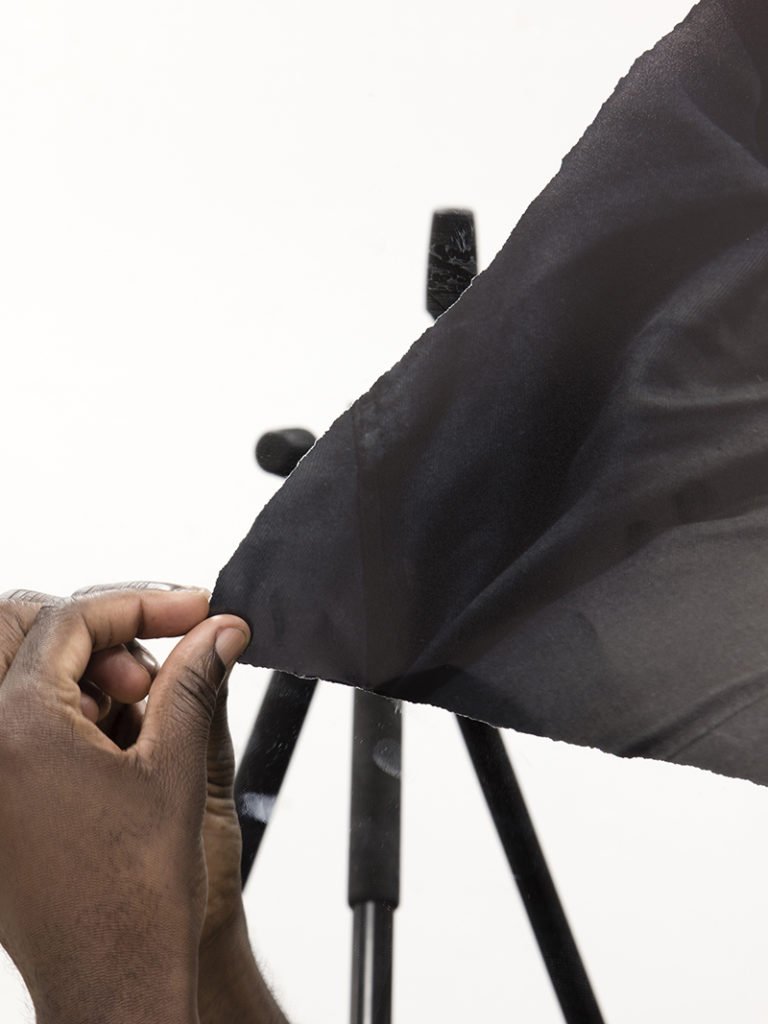 g. I suppose I consider the word “pictorial” as more of an overarching term for the application of visual logic and the architecture of visual space; not so much a qualitative judgment or a strict definition of things. So in that sense, it was another way of saying that I appreciate the fundamental aspects of spatial exploration and figure/ground relationships that define a lot of your work.

But to your point about the notion or “artsyness,” that’s actually what I like most about your work, Paul. You aren’t engaging in aesthetics that seem contrived or over-baked. You don’t attack the eye in the way that defines a lot of contemporary trends. Your pictures are incredibly sincere to me, and a lot of that I feel comes from the restraint of your tonal qualities. The majority of your images are limited to tones of black and white in respect to dynamics of paper/ink, light/shadow, and the flesh tones of your figure models. And that speaks to me again of your not seeking to conceal the processes of your work. Often in your work, the studio environment itself is an active participant. You allow the staging of pictures to be as naked as many of the subjects themselves. And that brings me back to the sort of Mobius strip of referentiality that I see over and over in your practice.

To backtrack a little to what I touched on earlier, am I reading it correctly that the bulk of your studio practice is more improvisational in nature? Can you talk a little about your decision-making process? And what is the signal that tells you when a picture is complete?

P. Yes, that would be accurate to say that the work is improvised. But that improvisation leads to strategies that can help guide or structure the pictures. I have the mirror(s), two cameras, a still life or observation, a portrait, and the material accumulated in the studio. In a sense, I’m asking a question and I have those tools for answering it. Most resulting pictures will be failures, but some will be successful. I know then if a picture works, and will be printed. Or more often, the result is a picture that I’ll print and keep as a note on my way toward an end I’m not yet sure of.

I work best by improvising within boundaries. So I am not playing around with different camera and lenses, lighting, etc. I try to isolate the element that I’m playing within. I’m interested in the shifts and variation that happen over time in a project, and how one bleeds into another. 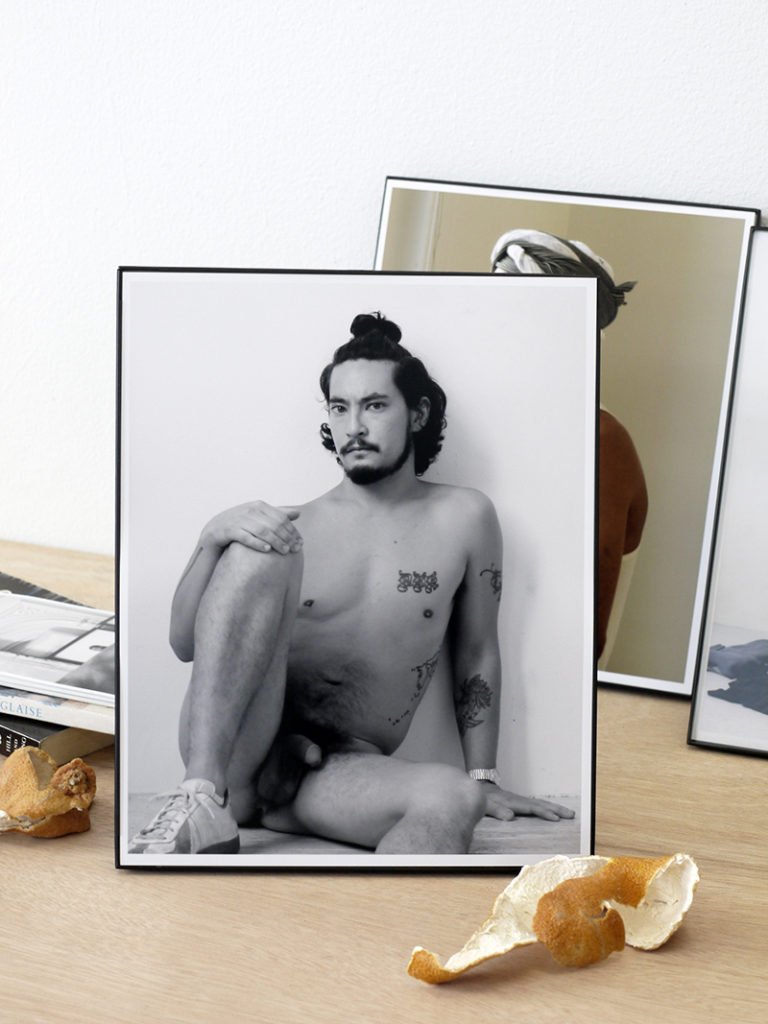 g. I can see how those shifts play out in your work in the sense that your practice it isn’t confined into the notion of a “series,” but is more open and free-flowing like a steady evolution. Do you have any foresight on future shifts or turns in your work that you see coming on the horizon?

P. I have some mental notes on unexplored territories, but since I don’t plan out projects I can’t really say what comes next. I am thinking more about Lawrence Durrell’s novels, point-perspective, and glory holes. I made some collages, one of which is going to the [MoMa 2018] New Photography exhibition. That was a challenge that I hope turned out well, and I think I might try some more. As long as I can keep the conversation going I’ll have material to work with. But what it will be, I can only guess.

g. Thanks for your time, Paul. 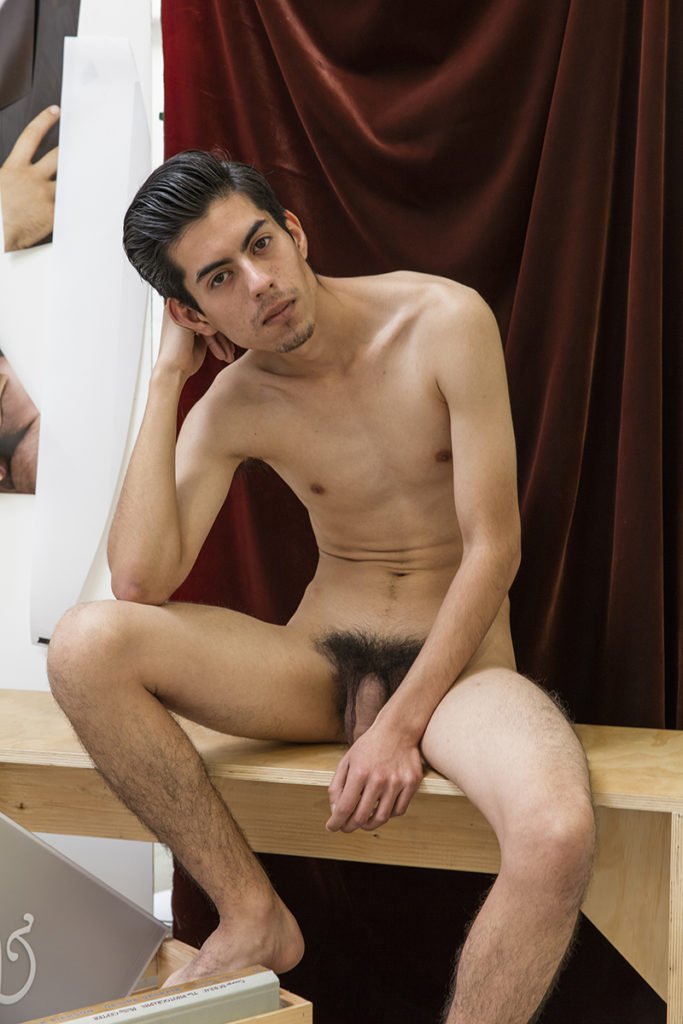 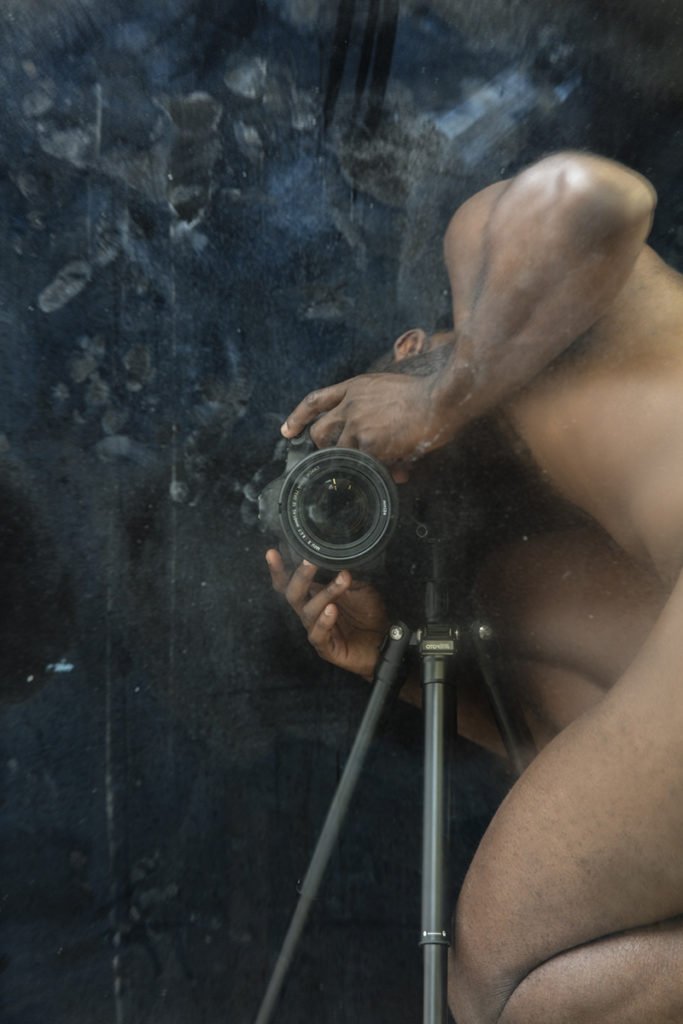 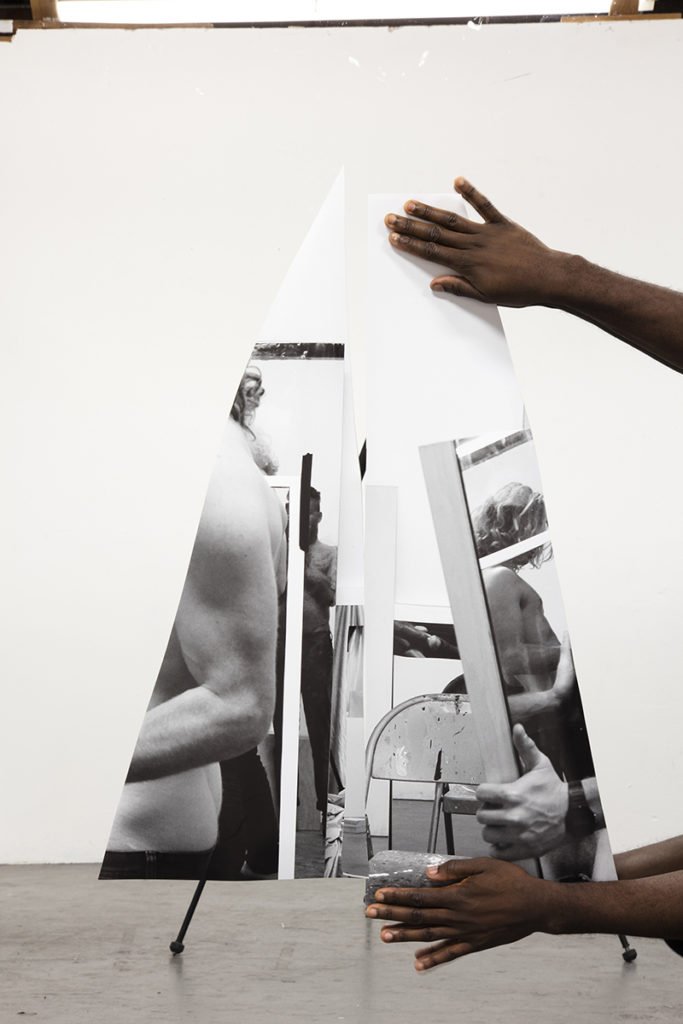 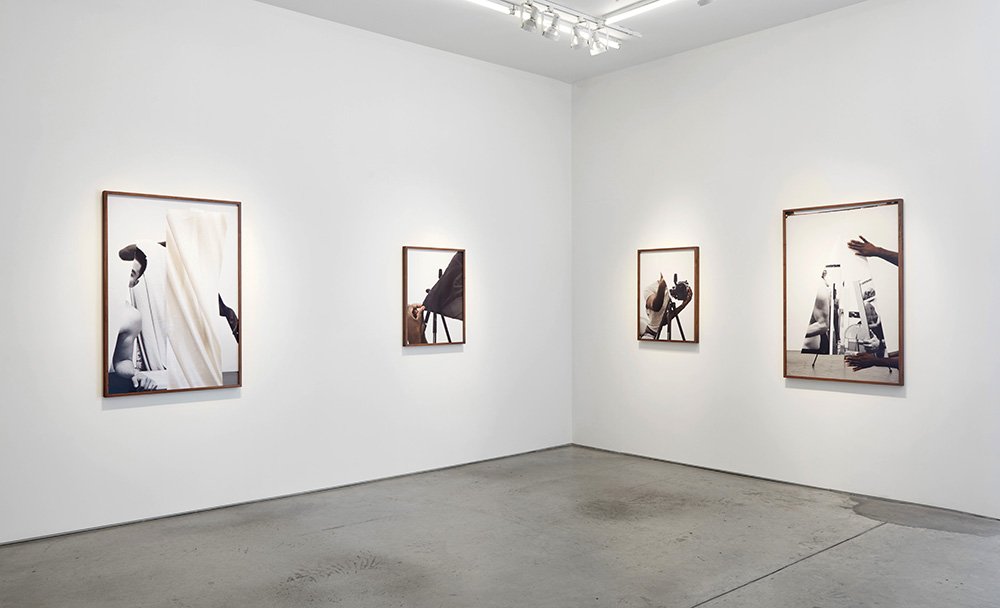 Paul Mpagi Sepuya (b. 1982, San Bernardino, CA) lives and works in Los Angeles, where he received an MFA in photography at UCLA in 2016. From 2000 – 2014 Sepuya resided in New York City, receiving a BFA from New York University’s Tisch School of the Arts in 2004 and participating in Artist-in-Residence programs at the Lower Manhattan Cultural Council, the Center for Photography at Woodstock, The Studio Museum in Harlem and Fire Island Artist Residency.

Sepuya’s work is in the permanent collections of the Museum of Modern Art, the Whitney Museum of American Art, the Guggenheim Museum, the Studio Museum in Harlem, the International Center for Photography, the Cleveland Museum of Art, the Milwaukee Art Museum and the Carnegie Museum, among others. Recent solo exhibitions include “Dark Room” at team (bungalow), Los Angeles and “Figures, Grounds and Studies” at Yancey Richardson Gallery, New York City, and group shows at the New Museum, Callicoon Fine Arts and Sikkema Jenkins & Co., in New York City. He will be participating in “Being : New Photography 2018” at the Museum of Modern Art, New York City, opening this coming Spring.

Sepuya’s work has been reviewed in ARTFORUM, The New Yorker, Art Review, Frieze, Hyperallegic and the Nation, and he is a recipient of the 2017 Rema Hort Mann Foundation’s grant for Los Angeles artists.

Beyond the Usual Suspects: Photography at the 2017 Miami Art Fairs