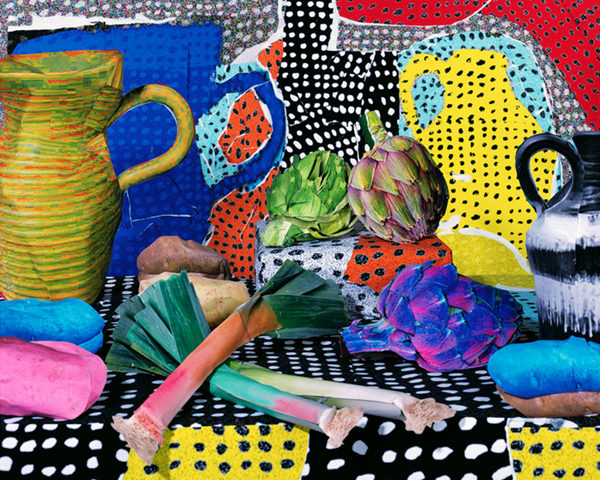 Artichokes and Leeks, 2014, from the series Screen Selections and Still Lifes. © Daniel Gordon.

Daniel Gordon is a photographer who creates highly illusionistic images of objects that he constructs from paper prints. His photographs, which, resemble Dada collages and Matisse’s paintings, appear contemporary, possibly because of the medium itself that serves both as the method of production and point of reference in the work. Gordon’s work employs “straight” photography to record his tableaus, which brings to life the magical transformation of seemingly nothing into a colorful and visually seductive something. While the artist uses traditional 4×5 or 8×10 camera, the individual images used in the construction of the still lifes were sourced from the Internet and retained the low-resolution look. In the final photographs, the tension between analog and distinctly digital, reality and theatrical illusion creates hypnotizing effect. After seeing Gordon’s work in a few shows, I had the pleasure of meeting him in person at a panel organized by the photography program at the University of Chicago¹. This interview took place via email after our initial meeting.

Anastasia Samoylova: How did you come into photography? In what ways do you think you were influenced by your education from the renowned program at Yale?

Daniel Gordon: I started making photographs in high school, and knew right away this was what I wanted to do. I went to Bard College for photography and then to Yale for graduate school. The people, both students and faculty, were incredible at both places. In many ways, my community after school is the same as my community while in school, so I continue to be influenced by these institutions long after being a student.

Still Life with Onions and Mackerel, 2014, from the series Screen Selections and Still Lifes. © Daniel Gordon.

AS: Speaking at the Unsuspending Disbelief panel at University of Chicago, you mentioned that despite the obvious differences in the methods of production, both your Flying Pictures and Still Lifes are exploring the veracity of a photograph. The Flying Pictures are photographs of you suspended in the air in various landscapes. Still Lifes are comprised of images of objects constructed mostly out of printouts of Internet-sourced images. Can you expand on the idea of veracity and its role in photography, and how it relates to your work?

DG: I don’t know what I can say about the veracity of photography that hasn’t already been said, and better than I will be able to. But I can say that I believe my work, at its core, explores the idea of photographic transformation. Be it a flying picture enabling me to fly, or a still life arrangement collapsing space in a perplexing way. To paraphrase Gary Winogrand, I’m photographing particular things in a particular way, to see what they look like as a photograph.

AS: There seem to be some recurrent objects in your photographs, traditionally found in the genre of still life, like flowers, fruit, and vases. How do you choose the objects you are going to construct and photograph?

DG: There’s a lot of searching, and recycling, and changing of colors and pixels and paper scraps, but generally speaking I am making, looking, and photographing objects that interest me. I’m either interested in them simply as objects, or their history. AS: In what ways has the Internet influenced the types of images you produce? How would you imagine yourself working as an artist in a pre-internet era?

DG: I was working pre-internet! Or at least at the beginning stages of the Internet, in the early 2000’s… I was making flying pictures at the time, but I was also making constructed still lifes much like I’m making now. I was just taking all of the pictures myself. This process was incredibly time consuming, and I found myself getting bogged down by process.

Appropriating images was a very nice solution to this problem, and it allowed me to work more quickly, running through ideas, and expanding upon a visual language in a way that I had previously not been able to. When I started appropriating images I didn’t think of it as a political gesture, or even a provocative one–it seemed to me to just be a tool available for use. In other words, I was appropriating images, but attempting to make work that was not only about the appropriation. AS: Your recent work, Screen Selections, adds a surprising new dimension to the still lifes. Screen Selections present zoomed-in areas of some still lifes as autonomous photographs. When exhibited together, this method of presentation reminds me of the ‘loupe’ tool in image viewing software, where you see the photograph and close-up of a selected area simultaneously. Tell us about this new direction in your work.

DG: I had been struggling for years, asking myself if I were to make a completely abstract image, what would it look like? I tried many things, but I was never convinced. As the background patterns of my pictures became more important, and my prints/files got larger, I realized that there were many pictures within the image, and I was curious to see if isolating a portion of the image would/could work as an artwork in and of itself. I also really liked the idea that I was mining my own images, looking for parts to use for new things, and could convey different ideas and meanings through these parts. In the beginning I was very strict with my process–they had to be “pure” un-manipulated selections form the larger image. Then I began to use the idea of a selection more broadly, by using different sections and objects from different parts of the original image file, and I am finding these combinations to be very interesting, and fun to make. I think in a lot of ways I am curious to see how far it can go and still be considered a photograph. AS: How important is the distinction between representation and abstraction in your work? What does it take for an image to be convincing for you? How much space in your practice left for failure?

DG: Those are all such good questions. The distinction between abstraction and representation is not so important to me. I am more interested in trying to make convincing pictures, and for me, a big part a photograph’s quality has to do with its inner conflict, or the conflict it creates. For example, opposites such as wholeness vs. fragmentation, hand vs. machine, or the beautiful vs. the grotesque run through much of my work. More recently, the conflation of mediums has been of interest, and in particular, the intersection of photography and painting. In other words, I am excited to make pictures that can be viewed in more than one way.

AS: Your photographs appear to be both abstract (in form) and representational (in content). Do you classify your images as strict formalism? Where do you see your work in the context of emerging buzzwords, “New formalism” or “Post-internet,” being used to describe so much current photographic production?

DG: I am interested in colors, shape, and pattern, and am okay with allowing those things to create content. In the past I have had ideas, and executed them–my approach in the past five years or so really has been to go picture-by-picture, step- by-step, learning as I go. I tend to stay more engaged with the process this way, and make more progress within my work. AS: Since you’ve mentioned Garry Winogrand – one of the things he is known for is the sheer quantity of work he produced, much of which still has not surfaced. What is your idea of your lifetime project, or your life’s work? What do you hope to leave behind?

DG: I hope I’m not going anywhere for a while! I don’t know, I think this question is better left to someone with more experience. AS: Finally, what are you working on now? What are you looking forward to in 2015?

DG: I am working on Screen Selections at the moment. Skull and Pitcher, 2014, from the series Screen Selections and Still Lifes. © Daniel Gordon.

Daniel Gordon (b. 1980 Boston, MA; raised in San Francisco, California, USA) earned a Bachelor of Arts from Bard College in 2004, and a Master of Fine Arts from the Yale School of Art in 2006. His notable group exhibitions include New Photography 2009 at the Museum of Modern Art in New York, and Greater New York 2010 at MoMA PS1. He is the Author of Still Lifes, Portraits, and Parts (Mörel, 2013), Flowers and Shadows (Onestar Press, 2011) and Flying Pictures (powerHouse Books, 2009). He is the winner of the 2014 Foam Paul Huf award, and exhibited his work in a solo exhibition at the museum in 2014. Gordon has been a critic in photography at the Yale School of Art. He is represented by Wallspace in New York City, and lives and works in Brooklyn.