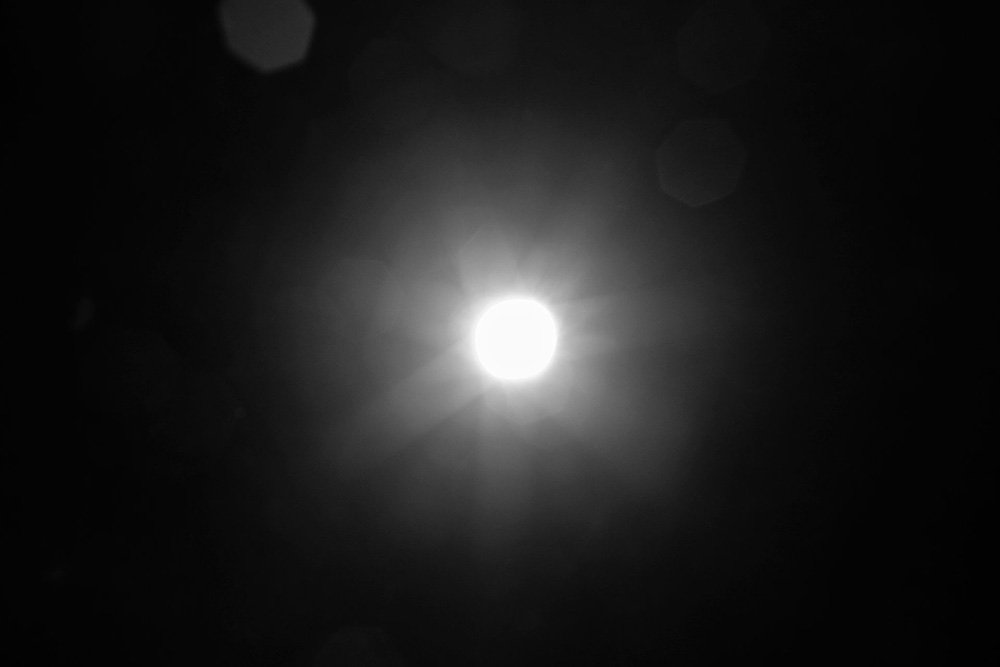 The Sun Will Set In The Same Place, from the series Life Stand Still Here. © Rafael Soldi.

For nearly five years, Peruvian-born, Seattle-based artist Rafael Soldi has transformed loss and uncertainty into a profound, sometimes abstract photography series Life Stand Still Here. It branched from an earlier project based on a sudden breakup and evolved into a murky succession of images that connect Soldi’s deeply personal moments with grander, more universal struggles. Using a range of techniques including still life, abstraction, and a large-scale grid of photobooth portraits, Soldi asks viewers to consider the connection between his experiences and their own.

Life Stand Still Here is, in Soldi’s words, “a tool to process personal trauma, immigration, childhood, recurring dreams, spirituality, and the human condition.” In advance of his first New York City solo exhibition opening Thursday, March 29th at ClampArt, we spoke to discuss the pain, process, and symbolism in his work.

Jon Feinstein: This work was originally framed around a breakup, but it’s come to address many layers of disconcertion and otherness.

Rafael Soldi: My previous work, Sentiment, was framed around the breakup. This work explores themes that were only possible for me to understand/unlock as a result of trauma, which in this case was a breakup. When life challenges us we discover that we reveal ourselves to ourselves. Life Stand Still Here unravels and honors this heightened sense of selfhood; this universal yearn to understand what lies within us and who really is within our own facade. 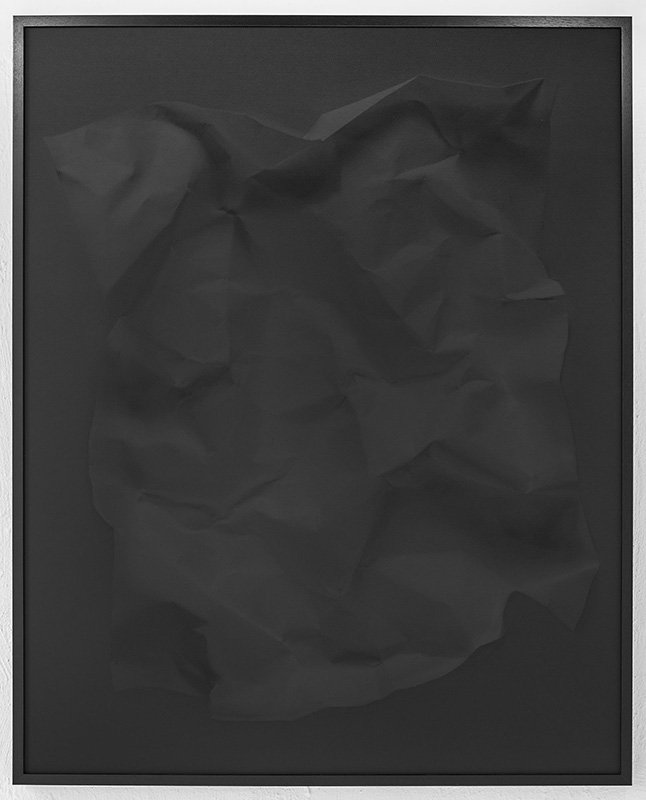 JF: Virginia Woolf has become a huge influence on your practice. How does she fit into your thought process?

RS: My connection to Virginia Woolf came when I was already working on this project. I was struggling to find the words to describe this “innerness.” I stumbled upon a great piece by Joshua Rothman on The New Yorker, titled “Virginia Woolf’s Idea of Privacy.” Rothman goes on to break down Woolf’s fascination with preserving life’s mystery, and her masterful unlocking of visceral moments of complete internal space.  I really connected with this reading of Woolf and went on to read a few of her books. The title of this project is from the book “To The Lighthouse”.

All Day I Hear The Noise of Waters, from the series Life Stand Still Here. © Rafael Soldi.

JF:  Life Stand Still Here is incredibly personal, yet you’re wearing it proudly on your sleeve. What’s it like processing the internal as public, and also as a material object one can collect, purchase, acquire?

RS: I’ve never known how to make work that is not deeply connected to my own story. I’ve never been able to work in an objective, documentary way. But ultimately, I’m less interested in sharing the details of my life and more interested in human nature, using what is closest to me, myself, to explore universal ideas around the human psyche. So whether I’m talking about grief, heartbreak, family, or immigration, I’m interested in these ideas through the lens of a visceral and emotional human experience. The pieces in LSSH are very personal, but the only thing that hints at that are titles. Otherwise, they are pretty abstract, yet many people have told me that looking at them has brought on a very intense emotion (of mystery, or sadness, or curiosity, or fear). Ultimately that’s what I want and that’s what appeals to people, to see themselves in a work. So I see it less as a stranger owning my story, and more as our human stories as mirrors of one another. 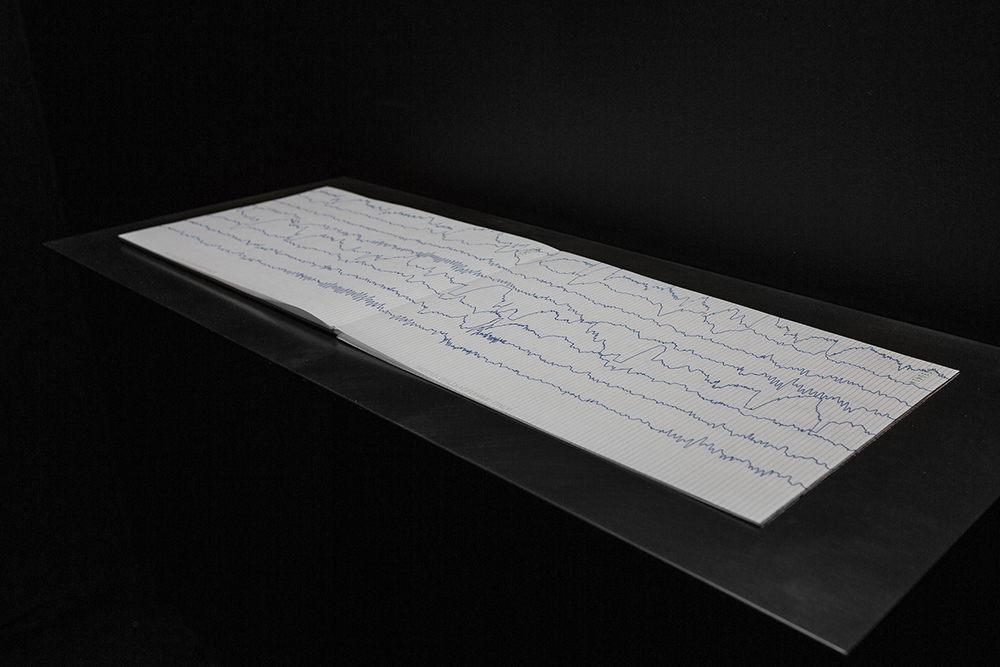 JF: Originally, LSSH had a feeling of aesthetic distance – still life photographs played off anonymous portraits, often shot from behind. But with this new stage, you’ve included photobooth self-portraits arranged in various grid-like formations. How did this part come about?

RS: This new work is the beginning of something that I’ve been avoiding for a long time: processing and understanding my relationship to the country where I grew up, Peru, which is very wrapped up with my identity. There is a lot of shame, guilt, and strong feelings of placelessness and belonging that I’ve experienced since I left. I realized, after talking to other immigrants, that there is a certain type of grieving that one does when you leave a life behind to begin another. You basically trade in a future for a completely different one—for many of us privileged ones, we are trading it for a better one. But the fact remains that we leave our homes behind never knowing what our lives there would or could have been like. And I felt that I need to approach this head-on, it had to be me. So I’ve been having visions of all these lives that were never lived. For the last year, every time one of these visions presented itself, I stepped into a photo booth, closed my eyes and bid it farewell. The result is a small, private performance of sorts, a grieving exercise—not a portrait of me, but one of that life that was never realized. I then cut out one portrait from each strip, frame it individually, and display all 50 as a grid. The grid can be customized based on the space in which it will be hung. 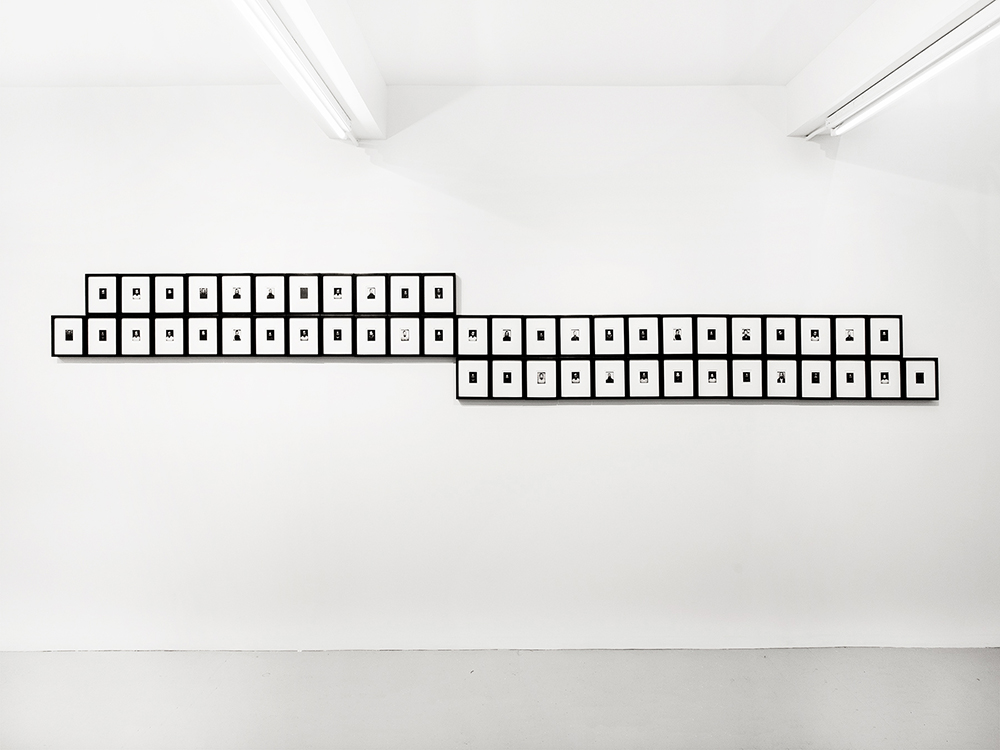 JF: Sexual and gender identity, as well as ideas about a masculine ideal, seemed to be a major factor in the original inception of the work. Is this still at play?

RS: Sexuality and gender will always play a role in my identity, and thus in my work. As I move towards explorations of my relationship to my home—Peru, the country where I grew up—it is inevitable to address that country’s complicated views on masculinity, sexuality, and religion. I think this, in particular, was a cause of shame and fear  in my early life that I am just now coming to terms with. The piece titled “Veer” pictures a man who is traditionally beautiful, in an ancient Greek kind of way, and there is a second panel in which he shifts his gaze and veers his head ever so slightly. I was interested in twisted shifts within us that don’t allow us to see ourselves as beautiful as others may—our inability to compute our own worth is real, especially in the midst of unrealistic ideals of beauty and constructed definitions of masculinity. 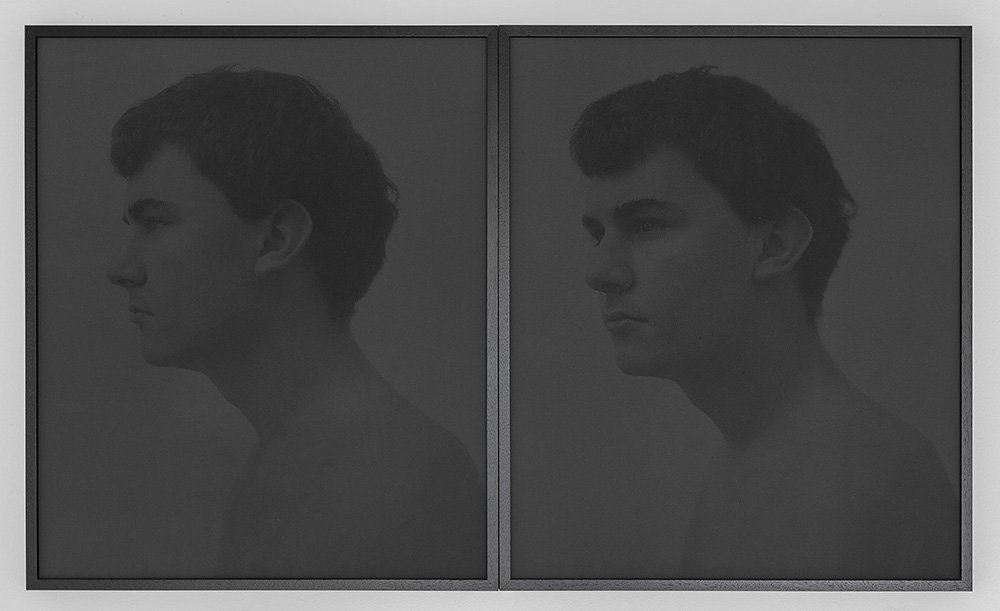 JF: Your exhibition at ClampArt shares the space with Brian Finke’s Hip Hop Honeys. It’s bold, pop culture-driven work, that, at least on the surface, might seem discordant from Life Stand Still Here. Do you see a relationship?

RS:  It is a striking pairing, and I’m really excited to be exhibiting at the same time as Brian Finke. I’ve been a fan of his work for a long time. In a way, I think it will allow for a nice flow from the vibrancy and energy of his images into the quietness of mine, and vice versa. Over the years Brian has explored subgroups from bodybuilders to flight attendants, cheerleaders, frat boys, and construction workers. What these all have in common is that they are all the hyper-performing of gender, and there are a lot of very complex readings that one can make. But ultimately, we are both looking at identity. My work will be in the back of the gallery so viewers will see Brian’s work first. I’ll be curious to see if one’s reading of the work shifts as they move through the space. 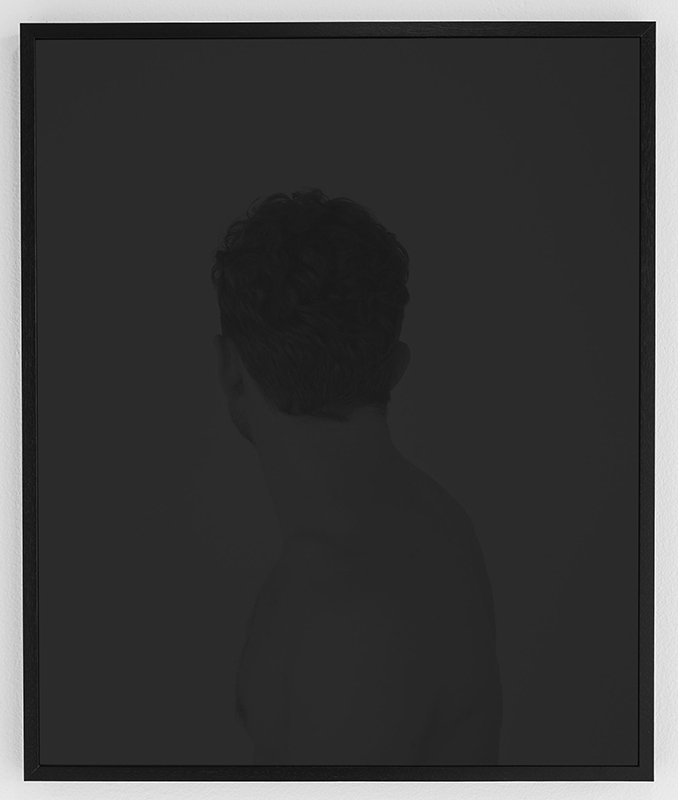 JF: Where do you see it going from here? Is it still evolving?

RS: Yes, I think the next step in my practice is to continue to explore my relationship with the place I’m from. I am hoping to also address complicated issues around class and race in Perú that play an important role in my experience. 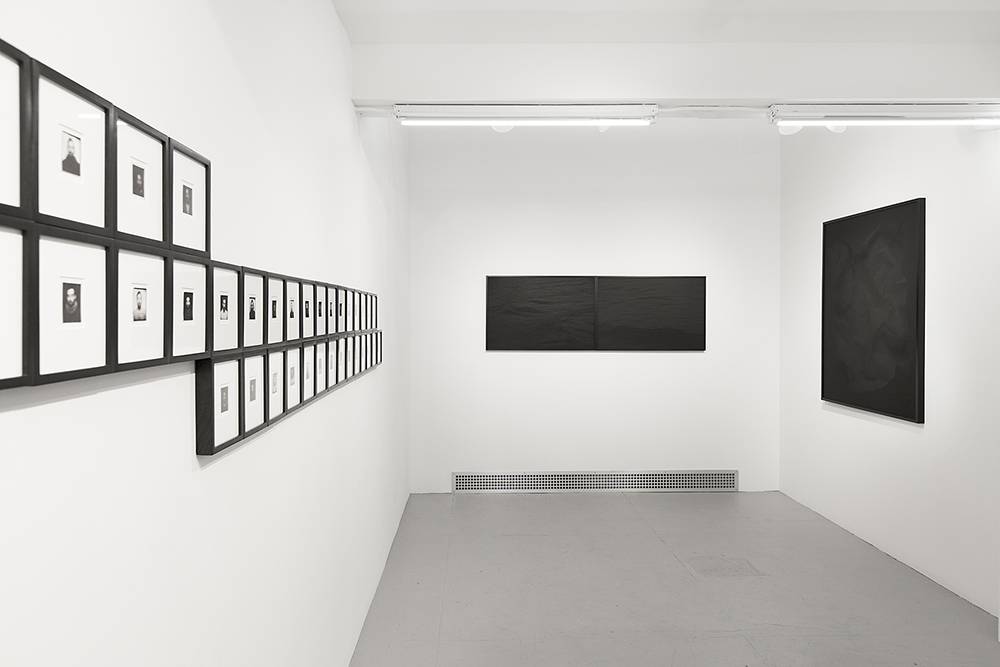 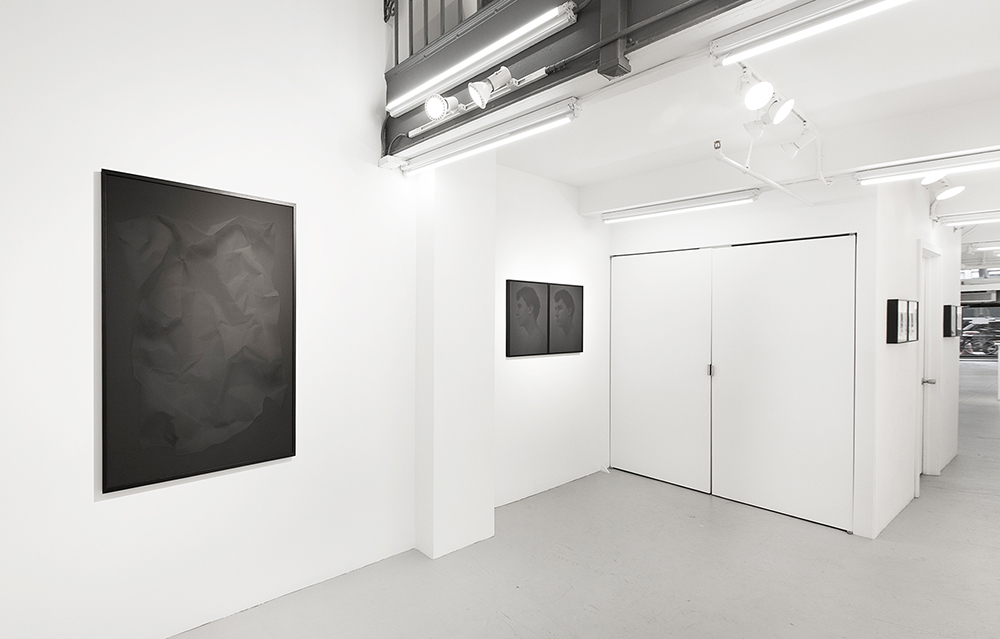 Rafael Soldi is a Peruvian­-born, Seattle-based artist and curator. He holds a BFA in Photography & Curatorial Studies from the Maryland Institute College of Art. He has exhibited internationally at the Frye Art Museum, American University Museum, Griffin Museum of Photography, Greg Kucera Gallery, G. Gibson Gallery, Connersmith, PCNW, and Vertice Galeria, among others. Rafael is a 2012 Magenta Foundation Award Winner, and recipient of the 2014 Puffin Foundation grant, 2016 smART Ventures grant, and 2016 Jini Dellaccio GAP grant; he has been awarded residencies at the Vermont Studio Center and PICTURE BERLIN.

His work is in the permanent collections of the Tacoma Art Museum, Frye Art Museum, and the King County Public Art Collection. He has been published in PDN, Dwell, Hello Mr, and Metropolis, among others. Rafael is the co-founder of the Strange Fire Collective, a project dedicated to highlighting work made by women, people of color, and queer and trans artists.

Jon Feinstein is a Seattle and New York City-based writer, curator, photographer, co-founder of Humble Arts Foundation. Jon has curated numerous exhibitions over the past decade and his projects have been featured in Aperture, The New York Times, PDN, The New Republic, BBC, VICE, The New Yorker and others. He’s also the co-founder of “Found” a collaborative, multidisciplinary gallery opening in Seattle later this year.
Follow him on Instagram @jonfeinstein @humbleartsfoundation and @found.space