She Could Have Been a Cowboy, 2016. Chromogenic print, 44″ x 59.” © Anja Niemi / courtesy The Little Black Gallery / Steven Kasher Gallery

The Photography Show, put on by the Association for International Photography Art Dealers (AIPAD), was overwhelming at times and euphoric at others. I spent over 15 hours at the fair determined to see all there was to see, a task that required visits to nearly 100 international gallery booths and about three dozen photobook publishers.

While there remained a gender disparity in exhibited photographers, this was not for lack of taste by contemporary dealers. The overrepresentation of male artists owes to a contingent of 19th– and 20th-century photography dealers, whose stock and trade is passing classical B&W photography from one hand to the next like a money-fueled game of hot potato. I’m convinced these works will never find permanent homes, and AIPAD fairs for years to come will continue sacrificing valuable space for peddling heritage practices of the Garry Winogrand and Arnold Newmans of the world. The fair would be far better served by including more galleries that promote the extraordinary artistic talents of our time, so many of whom remain under the radar while producing more challenging, relevant, and sophisticated pictures. Can’t they give old white men their own contingent fair? I suppose that AIOWMPAD doesn’t have the same ring to it.

The boldest, most challenging, and most socially relevant works at the fair were all produced by women. It was refreshing to see that contemporary dealers are closing the gap of representation equality, and that talent is surpassing maleness as the definitive criteria for contemporary gallery rosters. Below are thirteen artists who knocked my socks off at AIPAD this year.

Anastasia Samoylova enters into a unique engagement with the history of photography by composing her daily breakfast meals upon images of acclaimed and mostly white male photobooks. Her new Breakfasts With series asserts equality by adding to the compositions of photographers like Irving Penn and Stephen Shore, building atop their visual architectures and making them more visually engaging. Accompanying her three images from Breakfasts is piece from her ongoing Landscape Sublime series, which deconstructs landscape and environmental cliché through table-top still lives that give a nod to the traditions of Russian constructivism. There are few contemporary photographers who compare with the formal complexity and rigor of Samoylova’s compositions. She is a unique and distinguished talent in the field. 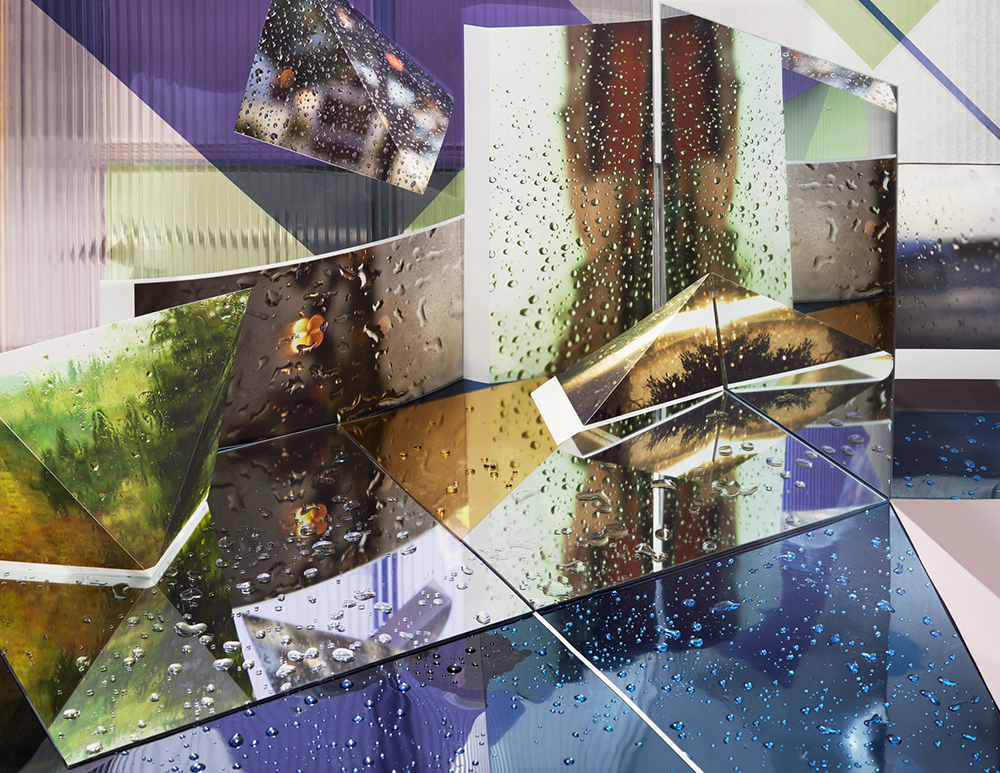 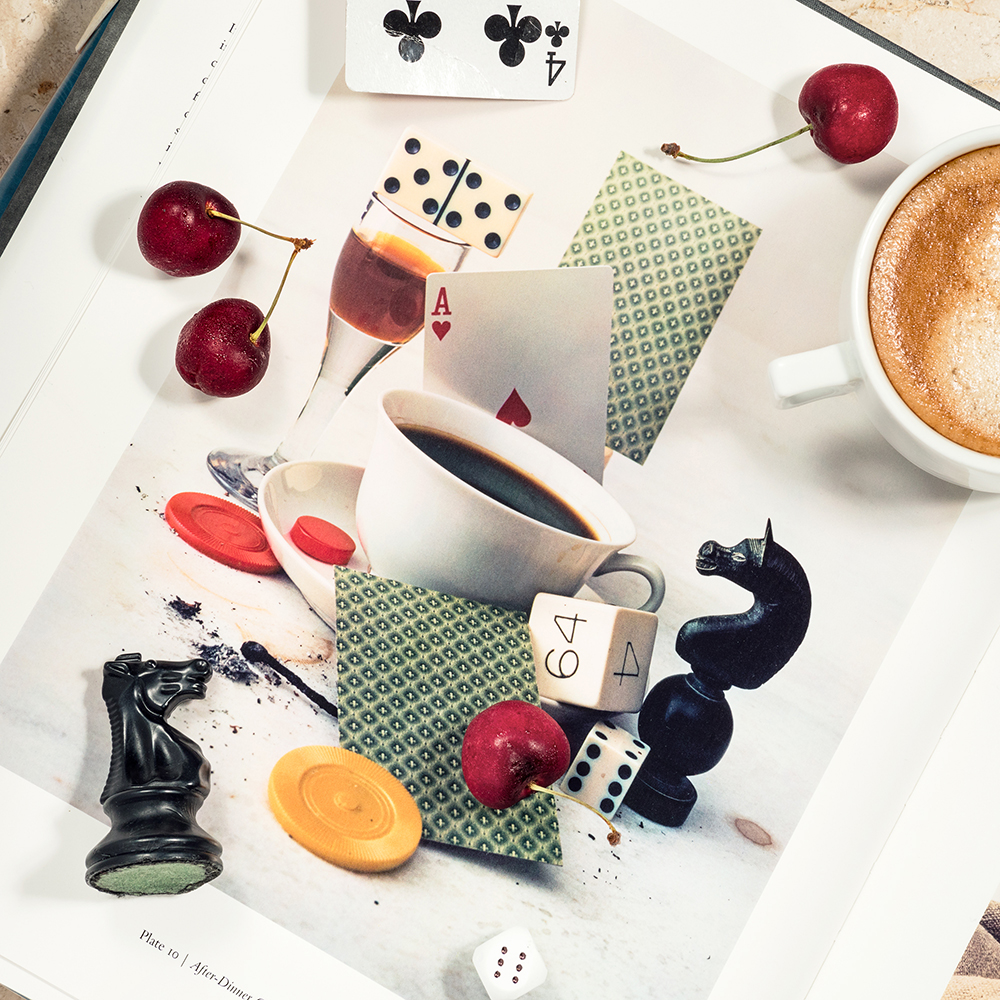 In the humorous and critical tableaux of She Could Have Been a Cowboy, Norwegian artist Anja Niemi envisions herself as a character submersing herself in the fantasy of the American Southwest. Her scenes convey a journey, spurred as an escape from conformity and a search for a new identity. The work is a multilayered and cinematic exploration of American myth, gender roles, identity, and the tradition of the androcentric American road trip photography. Niemi dares viewers to discredit the fantasy by finding a reason why she shouldn’t be a cowboy.

(Gallery note: She Could Have Been A Cowboy by Anja Niemi is at Steven Kasher Gallery until 14 April, then Photo London 17-20 May, and Amsterdam at The Ravestijn Gallery 8 September – 21 October.)

In her 9-image serial To Kill or Allow to Live, the artist dons a Victorian dress and poses blindfold with her hands up in a theatrical tableau. The work places the viewer as theater-goer, who witnesses Jackson perform various gestures that add up to a mimicry of Keanu Reeves iconic bullet-dodging scene in The Matrix. Jackson stated in a 2016 interview with Afropunk: “[the series] has several images of a woman dodging the Bullets of Justice”(!) The series is a ballsy, unapologetic, and searing critique on the legacy of a biased criminal justice system in the US. A timepiece dangles from the figure’s neck, sways with her movements from one picture to the next, and reminds audiences that the unjust dangers that the criminal justice system has posed to African Americans historically are very much still on the clock.

New York-based Brea Souders arranges illuminated forms on pure black foil in representational abstraction. The works in Windows, 2017 coalescence into a lyrical choreography of color and form. Souders’ inventive and material-intensive process utilizes film cut-ups, static electricity, and sculpted acetate. The artist stated in a recent email exchange that the piece is inspired by windows, particularly those of phone screens and other frames of informational context. Windows, 2017 is an exercise in inversion, using analog processes to reference the digital lifestyles and mediations that define our “post-truth” age. 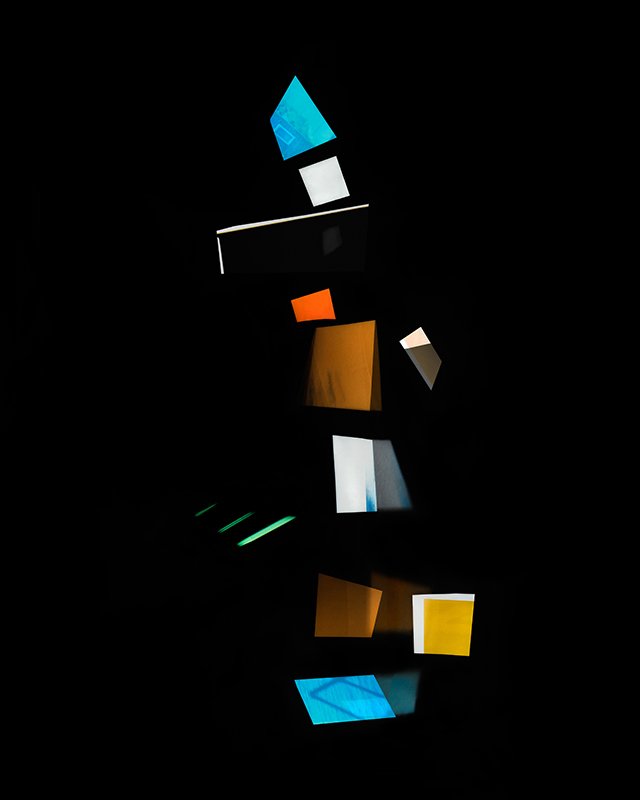 Jeanine Michna-Bales presents a show-stopping series of nighttime photographs made along Underground Railroad routes taken on foot by slaves in trek for freedom. The artist encourages viewers to imagine such journeys—the sight of the stars in rural skies, textures of the fields of corn that provided vital concealment, and the illumination of homes that signaled safe resting points. Viewing the installation at Arnika Dawkins’ booth made me cry. The simulacra of the work give viewers a pathway of imagination into the visual journey on the Underground Railroad and gave me a profound recognition and empathy that no photograph has ever given me. Absolutely stunning work. 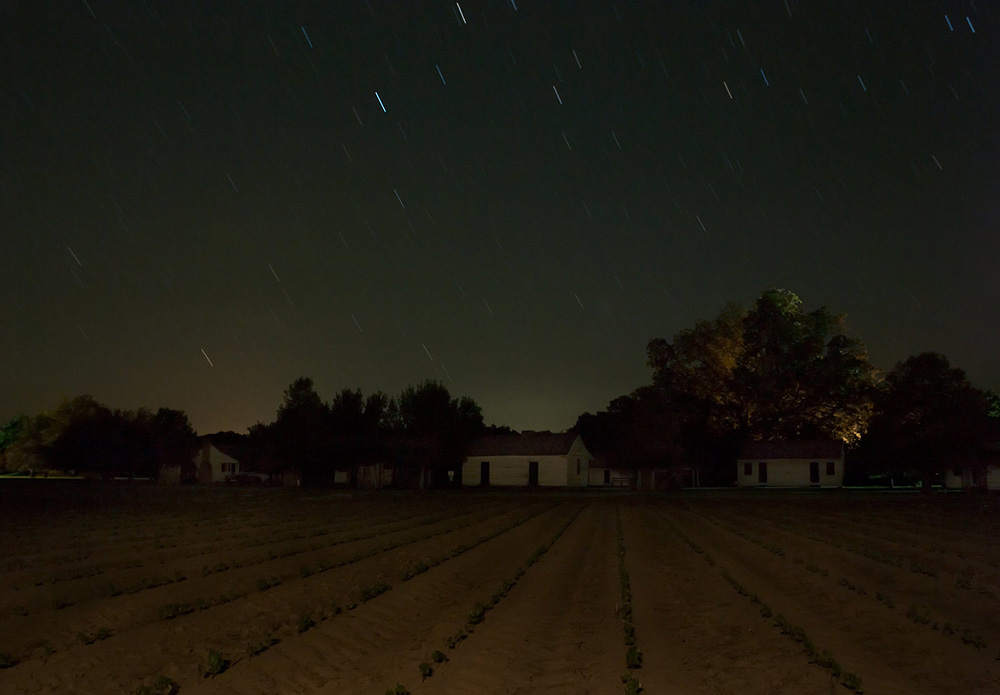 Korean-born, New York-based Jungjin Lee’s large-scale, hazy seascape, Wind 07-79, beckons mysticism and spiritual responses. The work is tactile, produced on paper the artist made herself and floated in a frame to emphasize the physicality of the print. The work encapsulates the characterization of a meditative work of art, and perceptions shift between material, visceral, and temporal. Lee is known for her fusions of Eastern and Western landscape traditions, and the visual dissonance of this piece mediates the view as more internal than external. 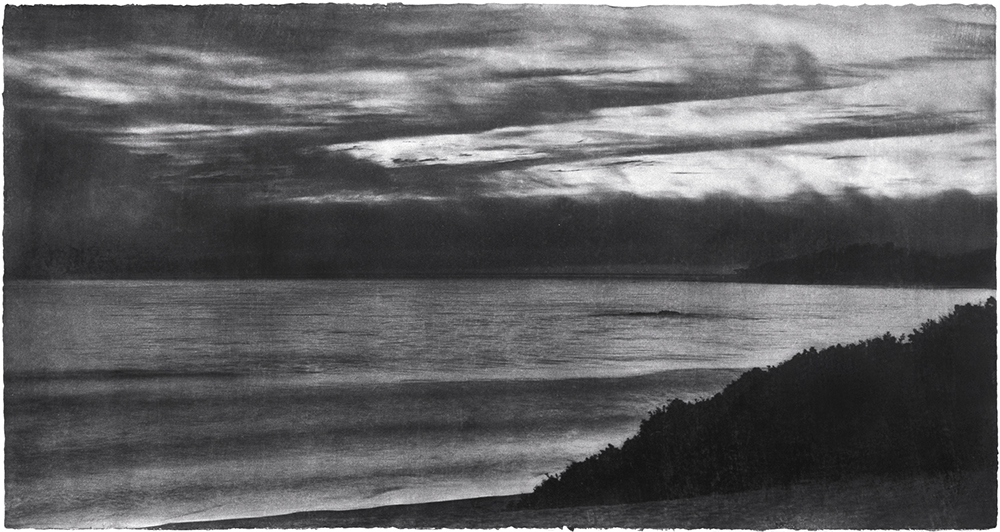 Like Anja Niemi, Canadian-born, Paris-based Kourtney Roy draws inspiration from the American West in her Sorry No Vacancy series. Through the adoption of a heroic character visualized in narrative fragments, Roy’s imagery enters into a charming Sherman-esque masquerade of self-as-other still cinema. Roy pulls viewers into a visual fantasy, where they witness her lassoing cattle, adventuring through barren grassland, and vacuuming a desert highway. A two-person show with Roy and Niemi would be a knockout…Photo world, can we make that happen?

Lissa Rivera, an associate curator at New York City’s Museum of Sex, explores vulnerability in Metamorphosis, a strikingly elegant portrait of her lover embracing his femininity. It is a picture that explores the parameters of gender fluidity while also celebrating her “beautiful boy” as her partner and muse. The figure appears guarded, with arms crossed and an expression of stubborn resolve. His garland crown and the litany of contradictions of his characterization enters into pictorial conversation with Picasso’s 1905 Garcon à la pipe. In her artist statement for the series, Rivera states she and her partner “explore both our captivation and our ambivalence towards these depictions of femininity.” 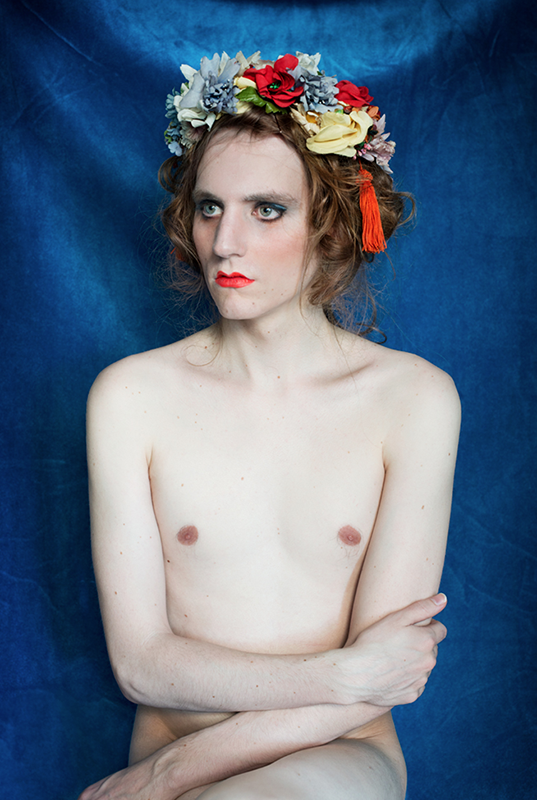 On display at the Robert Klein Gallery booth was Olivia Parker’s Flashback, a touching and visually energetic homage to her husband’s Alzheimer’s condition, a piece in a series entitled, Vanishing in Plain Sight. The vertical triptych is temporally uncertain, forecloses a clear reading, and offers only a fuzzy gaze at a photograph of her husband in reference to the slipperiness of time and memory. The visual excitement of this piece conceals a profound sadness and sense of loss. Parker, as among the most seasoned artists at the fair, has been making and exhibiting photographic work for over 40 years. 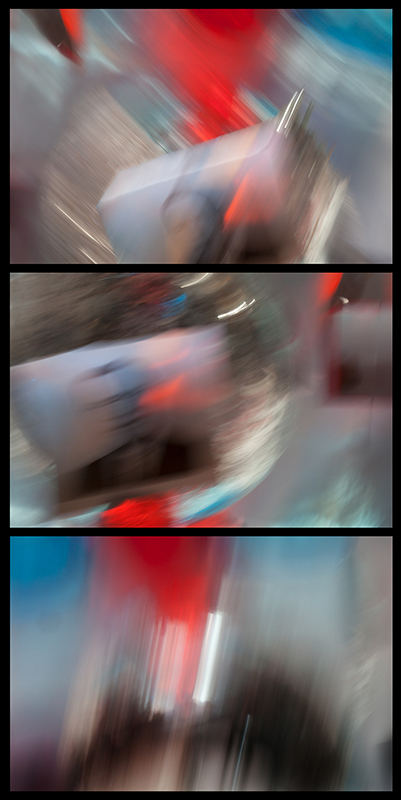 Commanding the booth of the Paris-based Galerie les Filles du Valvaire is the mononymously-named Smith, whose softly contrasted and minimal portraits allow for tender-hearted and introspective characterizations of her figures. In Untitled N ° 01, a seated figure is seen from behind, a vulnerable position that is guarded by a snake tattoo that slithers from the sitter’s back up along the side of her shaved head. The subject is characterized as both defenseless and dangerous, and the picture aesthetically whispers to its audience that there are more dualities of self-identity at play. 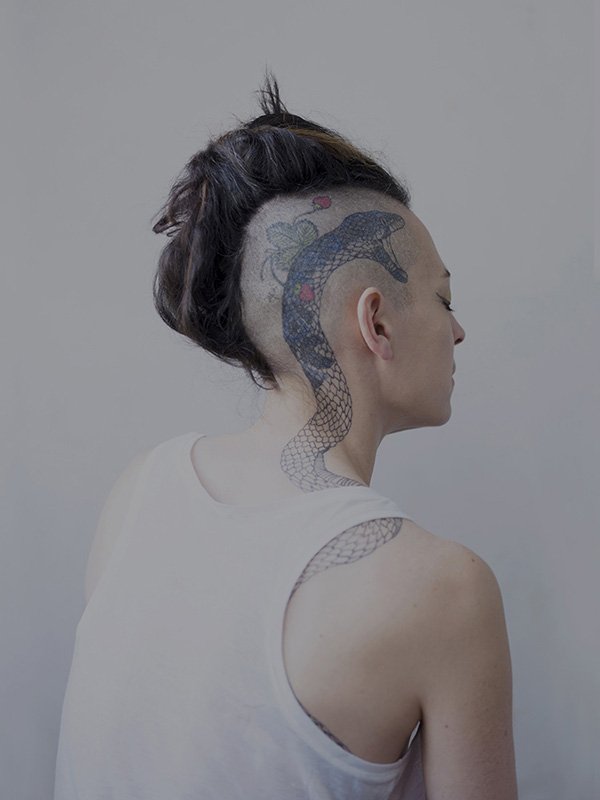 French artist Valerie Belin presents one of her large-scaled Painted Ladies at Edwynn Houk’s booth. The work consists of a black and white photograph of an agency model. Collaborating with makeup artist Isamaya Ffrench, Belin employs make-up applications for painterly effects. Lady Round Brush is named in reference to the digital retouching tools that groom and optimize fashion pictures into hyper-idealizations. The physical make-up along with further post-processing techniques fracture the linear space of the portrait. The figure is excised from her expected presence within a glossy-paged fashion magazine and is introduced as a ghost-like figure that haunts the picture frame. The piece holds an indelible presence at the fair, and looms over passersby with the cognitive weight of a history painting. 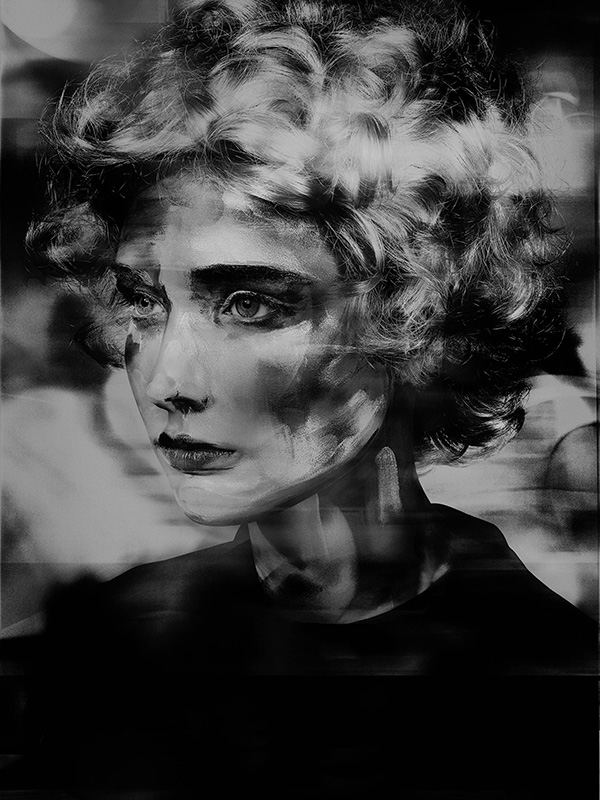 Ysabel Lemay’s ovular and colorful works stood out markedly on the walls in Catherine Edelman’s booth. The works are inventive photo-illustrations of vivid fantasy/nature scenes she defines as “hypercollage,” and curiously refers to with the acronym, “W.O.W (Wonderful Other Worlds),” in her biography. The cartoonish rendering and fantastical imagery recalls the oeuvre of Maggie Taylor. And while the floral and avian themes dip their toes into kitsch territory, the exceptional craft required to produce these works and their aesthetic energy defines Lemay’s work as a rare bird in the contemporary photography scene. 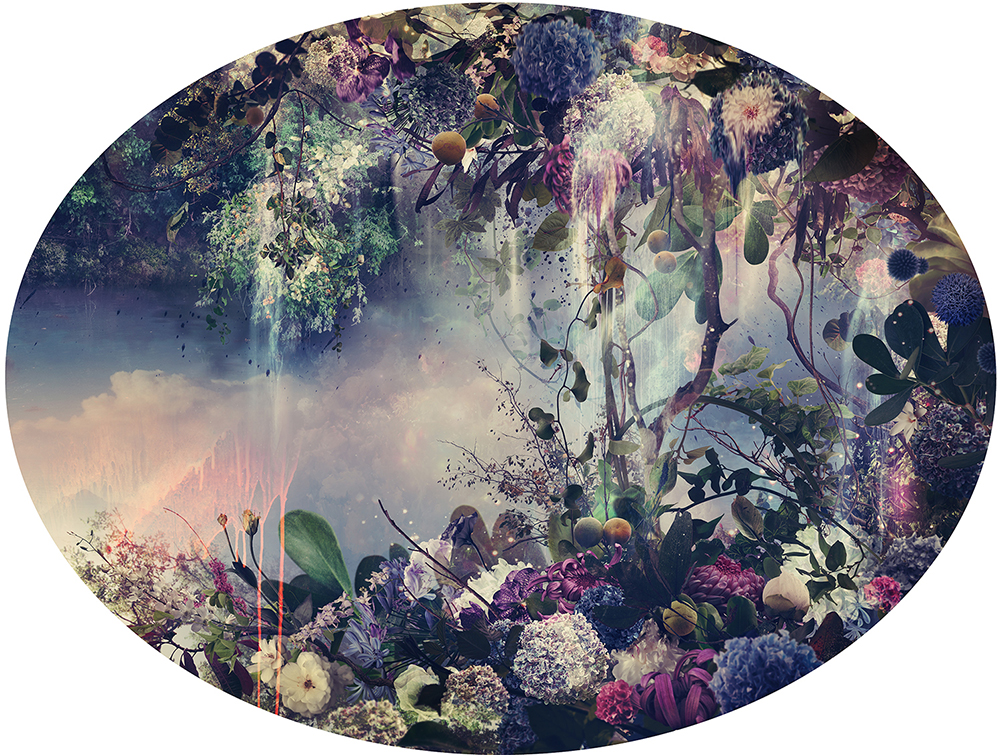 South African photographer Zenele Muholi refers to her work as visual activism that calls attention to the stigmatization and discrimination faced by black lesbians in her home country. In her recent and much-praised series, Somnyama Ngonyamashe, Muholi turns the camera on herself, adopting various characters that make reference to South Africa’s political history. Her works celebrate her blackness by turning her skin tone into its own subject matter, similar in aesthetic strategy to the tonal rendering seen in Kerry James Marshall’s litany of masterpieces. Muholi’s work is intricate, elegant, and strikingly graphic. Her eyes lock the gaze of viewers and don’t let go. 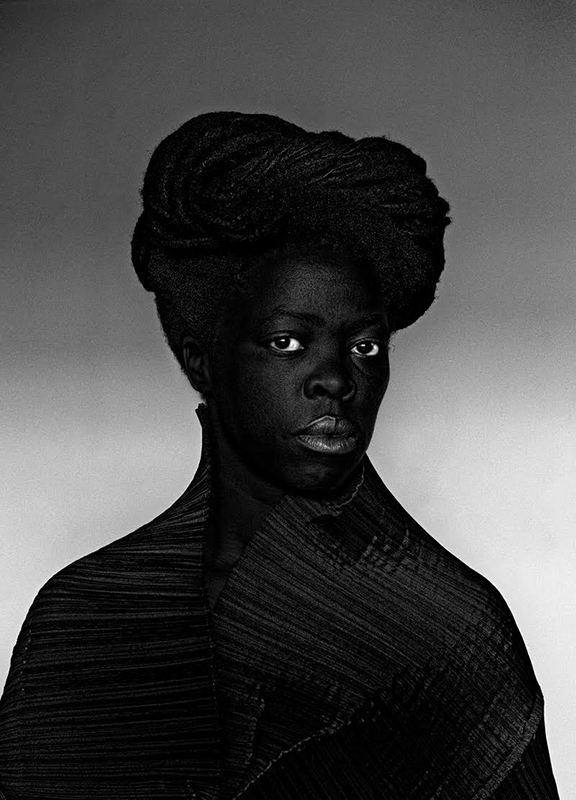 gregory eddi jones is the founding editor of In the In-Between.

Looking to the South: The Matter of Photography in the Americas