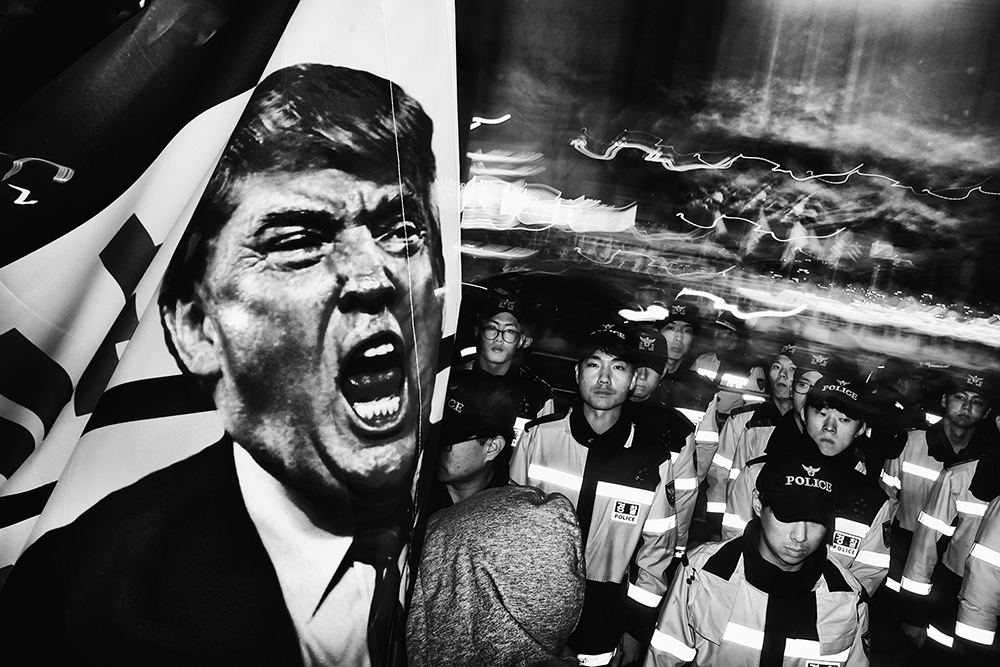 At the Ready — Police stand alert while surrounding an anti-Trump protest in Seoul.

In Seoul, hundreds of protesters with raised banners and candles chanted, “No Trump, no war!” Though impassioned, their presence was dwarfed by the National Police Agency who ordered its entire force to maintain maximum readiness at protest zones close to the US Embassy.

A demonstration was also held near the National Assembly while the US President addressed parliament.  With 8,000 police officers standing guard outside, Trump spoke of unification: ”We dream of highways connecting North and South, of cousins embracing cousins, and this nuclear nightmare replaced with the beautiful promise of peace.”

However, two months later, his fiery tone concerning North Korea returned. “I too have a Nuclear Button, but it is a much bigger & more powerful one than his, and my Button works!” With a single tweet, Trump re-validated prior fears of war — its threat continuing to loom over a future uncertain. 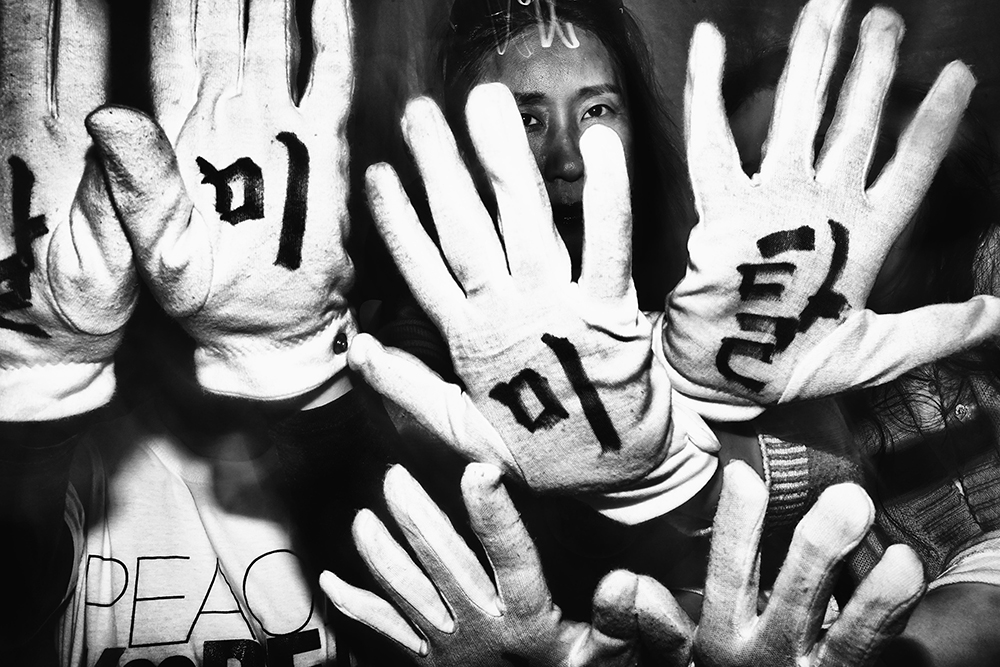 Show of Hands — An anti-Trump protest group calling themselves the Peace Mothers. The words “America” and “Out” are written on their white gloves. 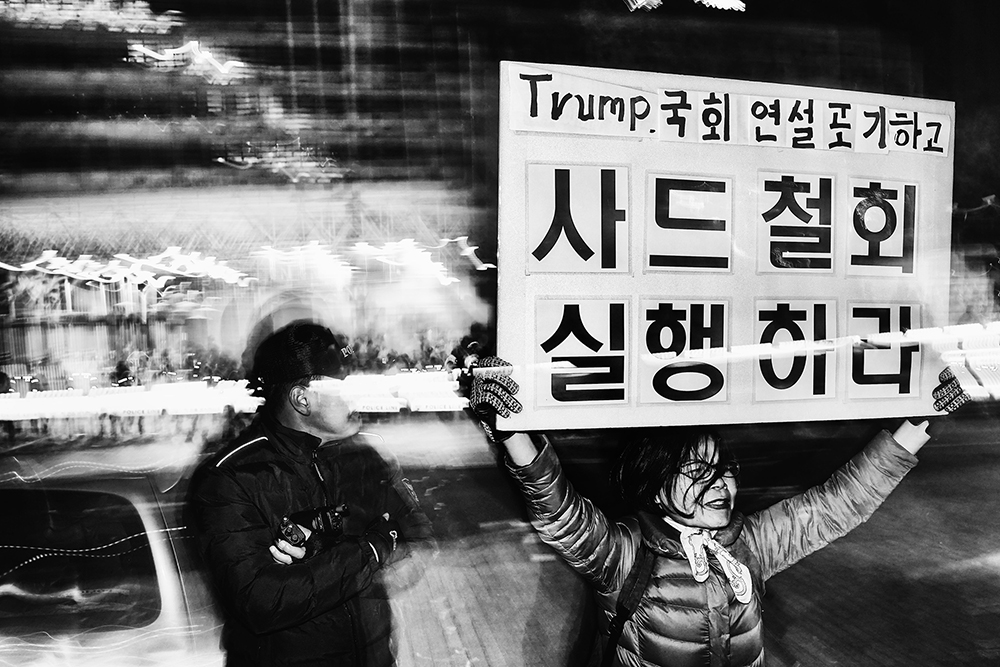 Under Watch –Protester outside of the US Embassy. Her sign reads: “Trump. Give up the speech at the National Assembly. Execute the withdrawal of THAAD.” 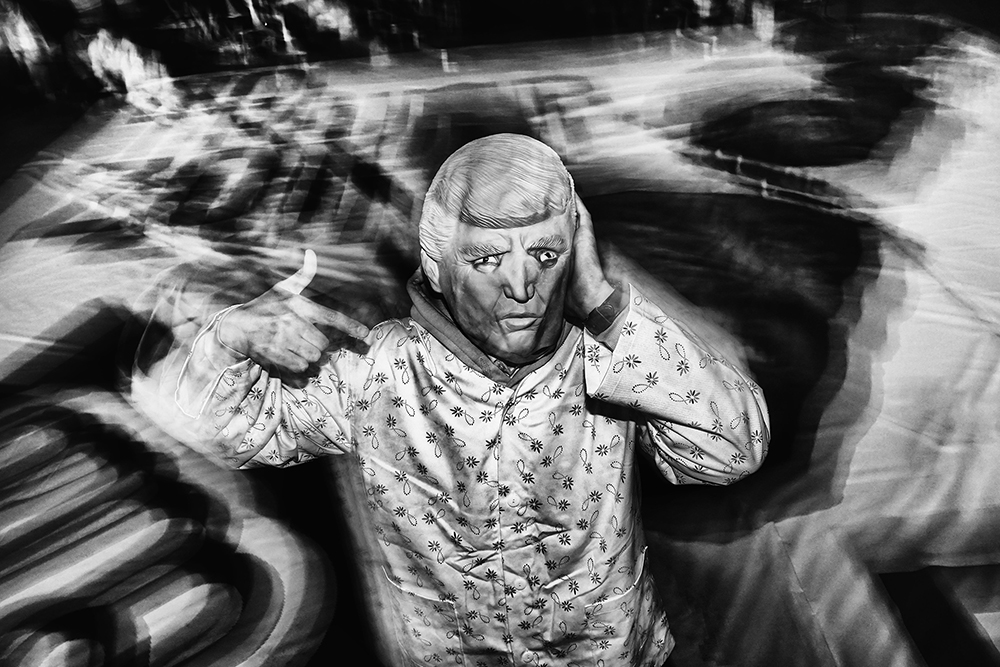 No Rest — A demonstrator wearing pajamas impersonates the US president during an anti-Trump protest. 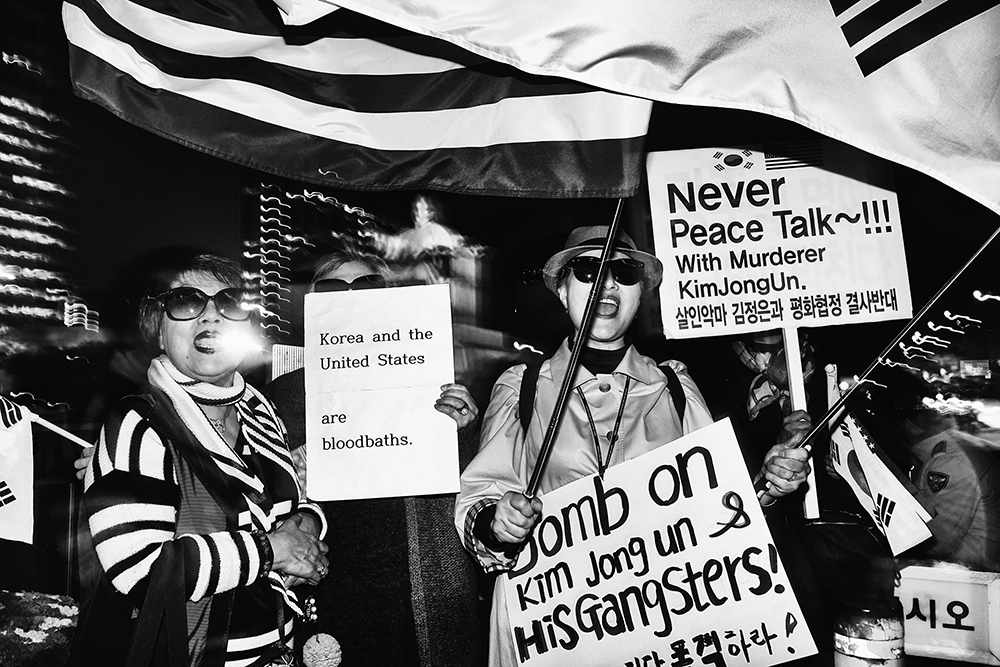 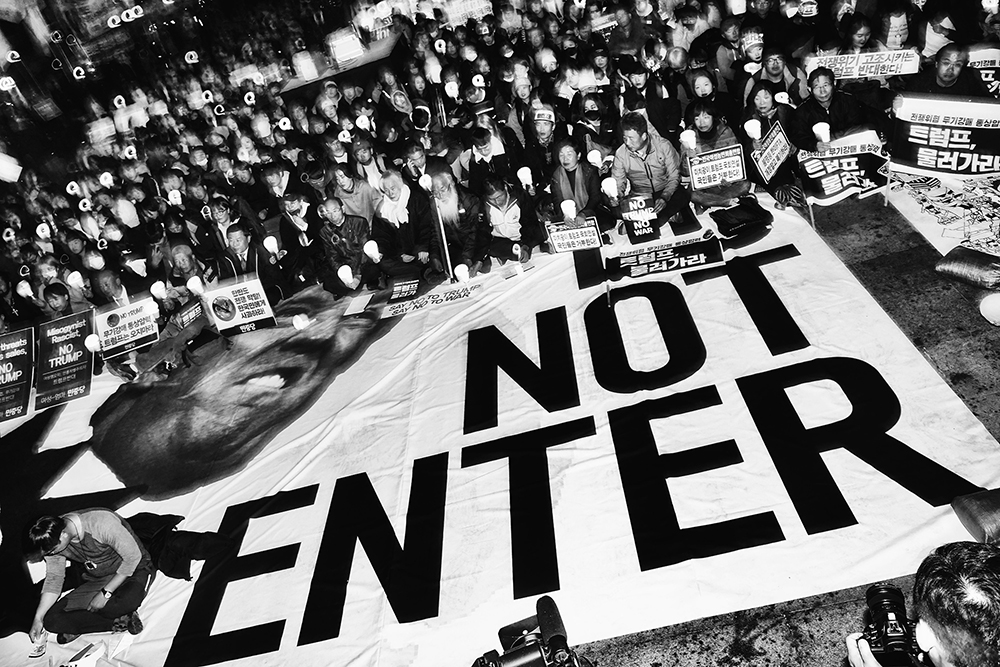 Sitting in Judgement — At Gwanghwamun Square, protesters sit down across the street from the US Embassy. 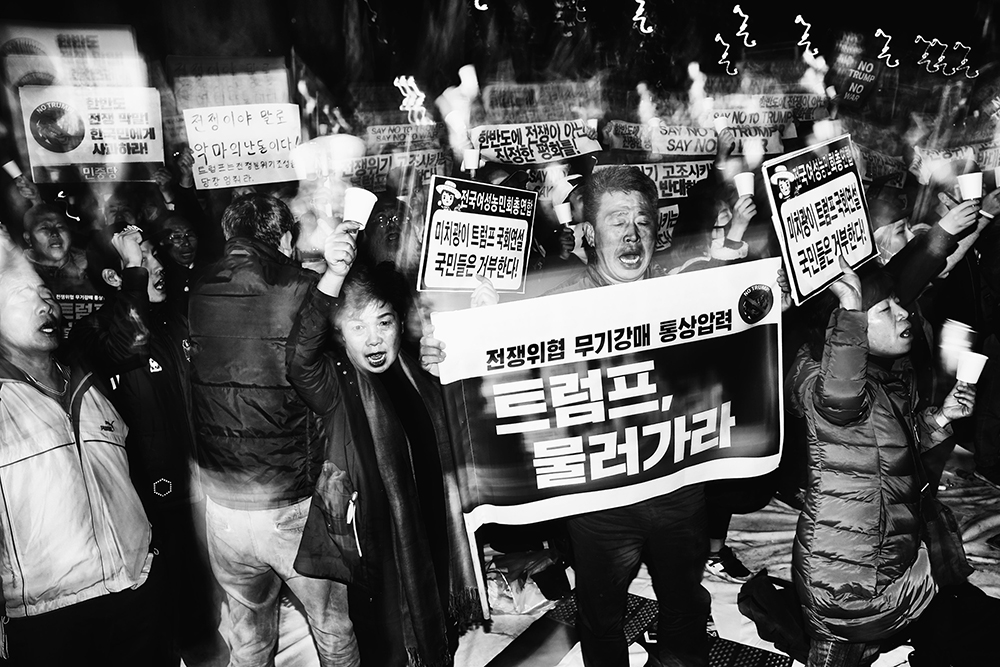 Loud and Angry — Anti-Trump protesters with banners and candles. Their signs read: “We oppose Trump’s speech at the National Assembly!” and “Trump, get out of here!”

The Calm Before — Police begin mobilizing in Gwanghwamun Square. 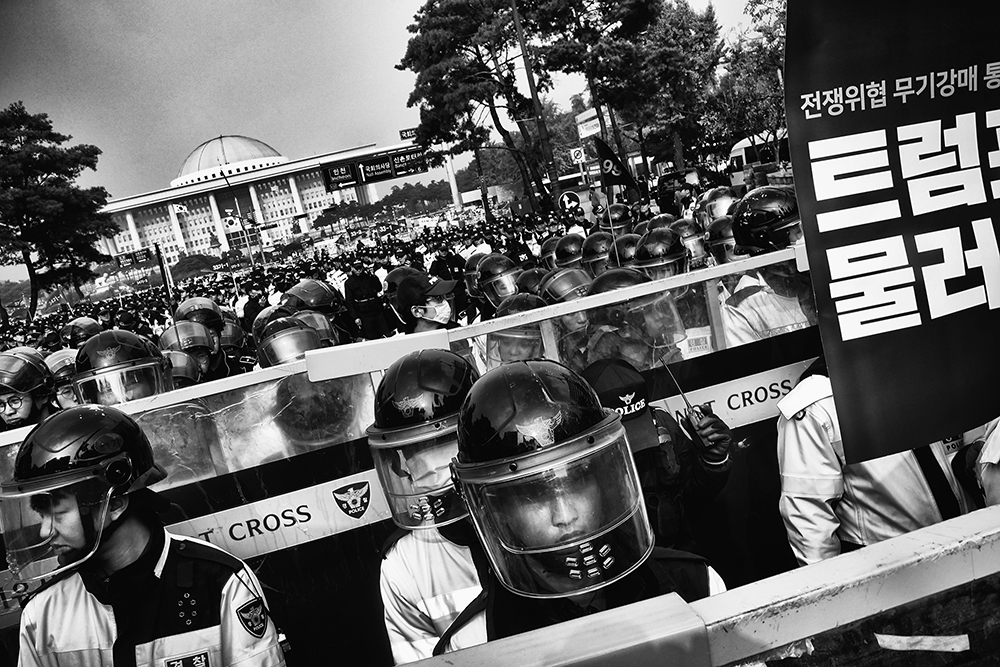 By the Numbers — Outside the National Assembly Building, police presence builds in anticipation of Trump’s address. 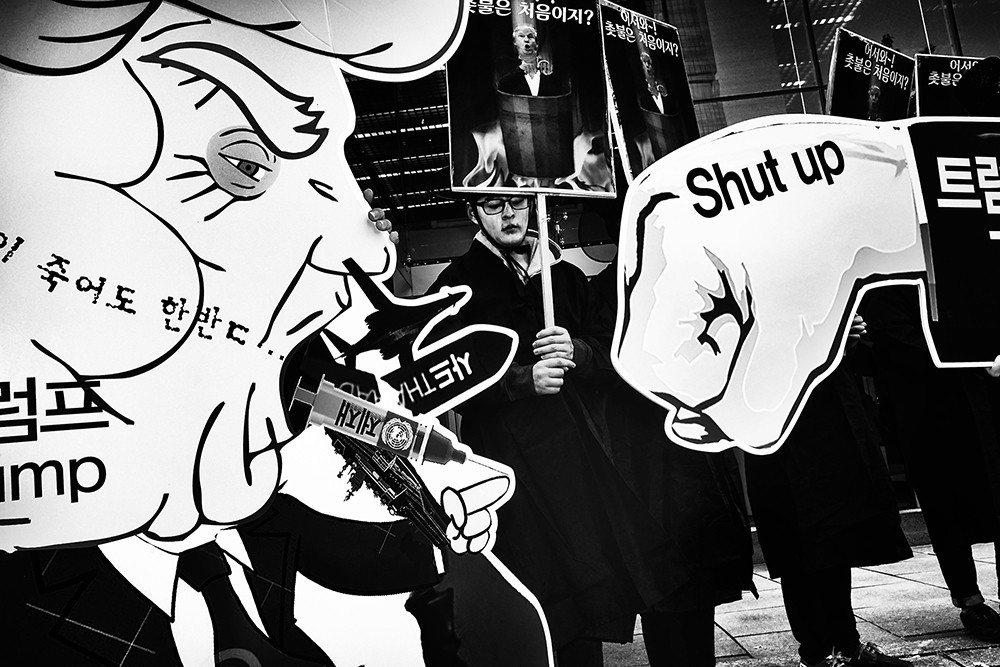 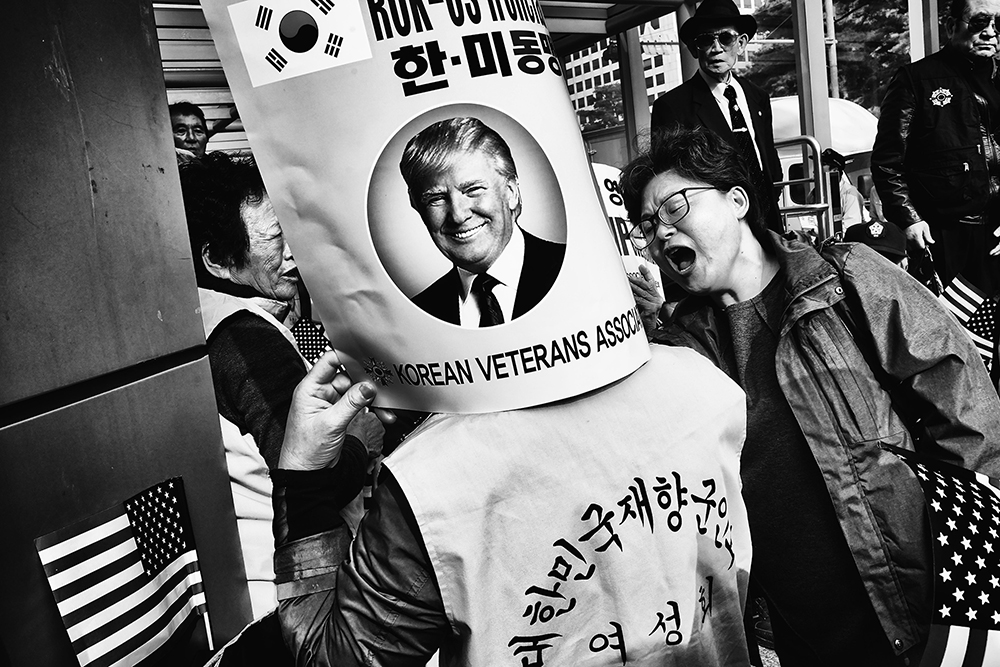 Take Cover — A pro-Trump supporter gets yelled at by the entrance of National Assembly station. Her sign advocates for a strong alliance between the US and South Korea. 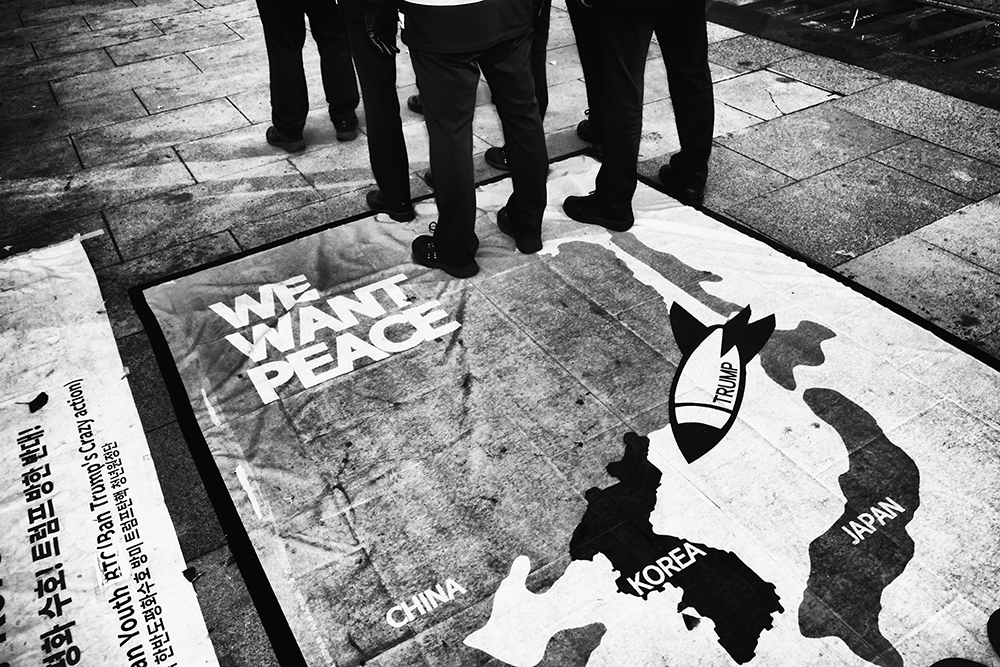 Stand By — Police officers at Gwanghwamun Square wait to cross the street near the US Embassy.

I’m an emerging photographer currently based in Seoul, South Korea. As a Korean-American who grew up in a rural area of Virginia, I have a unique perspective of Korean identity and its relationship to both global and regional communities. I studied photography as an undergraduate, but set it aside during my MFA program at James Madison University to concentrate on intermedia. After moving to South Korea I rediscovered photography, using it as a means to document and share my experiences. In 2016, I mentored under David Alan Harvey to further study photographic philosophy and authorship.