Regarding the Stock of Sex: Utopia Centerfolds at Play by Ina Jang, Brandon Isralsky, and Dean Sameshima 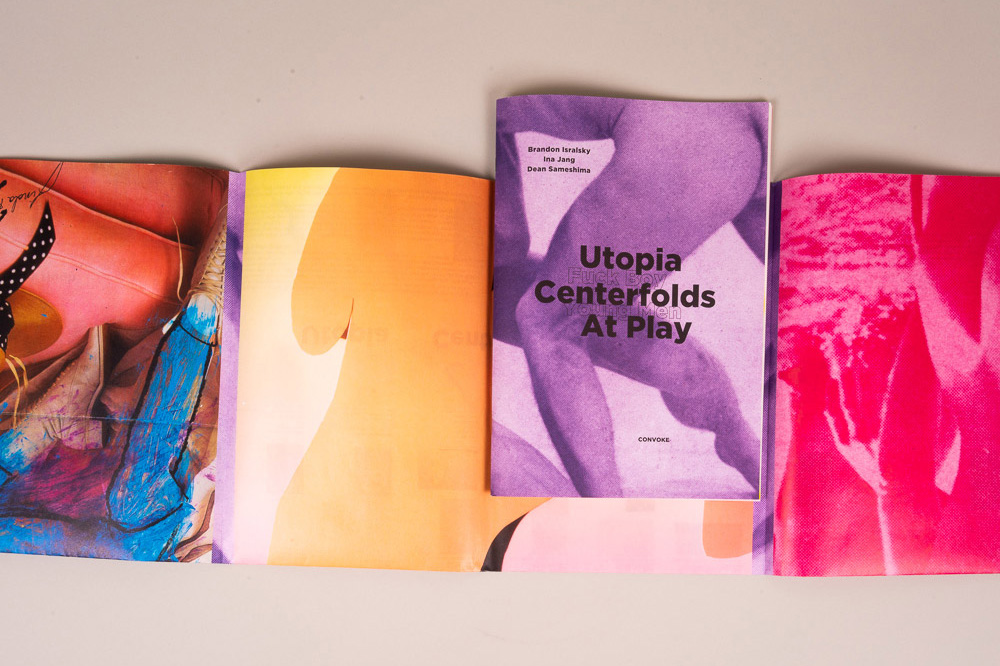 The three artists who converge in Utopia Centerfolds At Play (Convoke, 2019) engage in pointed re-authorship of pornographic material steeped in sexual objectification and flattened gender representation. If the camera alienates and reduces all that it captures, the pornographic goes a step further in using models and actors to evoke sexual fantasy, a theatre for an audience of mostly mindless primal male sexual urge.

Ina Jang, Brandon Isralsky, and Dean Sameshima are photographic artists cut from a different cloth. Together their work doesn’t venture to look behind the scenes of the industry to humanize its participants. Each artist critiques the source of pornography’s cultural collateral damage and utilizes aesthetic strategies that defy the image-products of sexual fantasy in subversive (Jang), aggressive (Isralsky) and ironic (Sameshima) methodologies. Throughout the 64 pages of Utopia Centerfolds At Play, the work of the three artists intertwines in colorful conversation. Pictures dance around the page spreads in a sharp and playful edit, and the bold hues, hard-edged marks, and repeatedly casual sights of male genitals make the book an enormously lyrical read. The playfulness of the book belies more serious concerns on sexuality and representation. 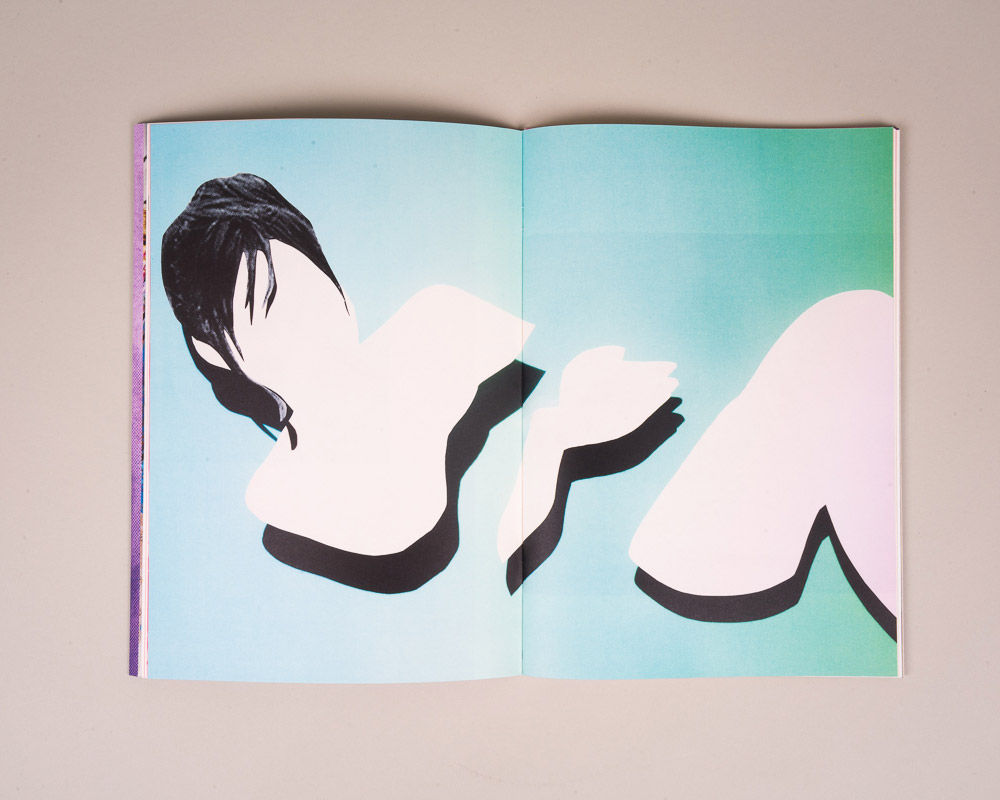 In Ina Jang’s Utopia, women in Korean and Japanese soft-core porno magazines are reduced to outlines and filled with flat gradients of color. The work summarily removes the individual model and leaves its shell, the iconic gesture of sexual promiscuity. Outside of celebrity sex tapes, the pornograph has no value for individual identity. Models play the role of stereotype, and Jang’s criticism pushes the homogeneity of her source material to an extreme, satirized rendition of itself. With a candy-colored aesthetic, the work is a subversive visual delight with underlying condemnations of objectification of the female body. Jang twists her source material, maintaining an essential spirit of fetishistic allure while enacting a symbolic censorship that drastically alters the function of the original.

Brandon Isralsky employs a similar censor-inspired strategy in Centerfolds and Fuckboys, which sees spreads and centerfolds of magazines like Playboy marked over with harsh black lines and expressionist color markings. Isralsky’s interventions fully obscure the original models and re-identify them as stateless and anxiously expressive sentinels which guard viewers from the siren song of the Playboy bunny. The resulting works function as a sort of aesthetic defense system that exists someplace between a Willem de Kooning painting and a defaced subway movie poster. Unlike Jang’s tactful and carefully crafted work, Isralsky’s contributions respond to primal sexual urge with primal and hostile mark-making.

Dean Sameshima appropriates pictures from vintage men’s fitness magazines that ironically represent homoerotic nostalgia where nude men, smiling and having fun, engage in physical activities like dancing, sports, human pyramids, and wrestling. The source pictures are designed in a mode of stock-photography, selling the notion of a gay male paradise. In one image a long-membered young man tosses a football to someone out of frame. In a later picture, one man holds another in a full-nelson while a third playfully pretends to punch him in the stomach. The three are naked within a generic wooded setting that recalls Romanticist tableau. They take on a characterization of sprites and faeries playfully jaunting in a care-free world. All these originally black-and-white images are rendered chromatic in single hues of pinks, oranges, yellows, and reds. It’s in this decision that Sameshima directs his critique on traditional single-dimensional representation of gay male culture.

Taken as a whole, Utopia Centerfolds At Play is a beautifully designed conversation between three artists who each critique the simplification of gender and sexual representation within pornographic spheres. The entirety of the sequence is a fun jaunt spanning culture and time though energetic aesthetics and a critical prodding of alienation, identity, and desire. 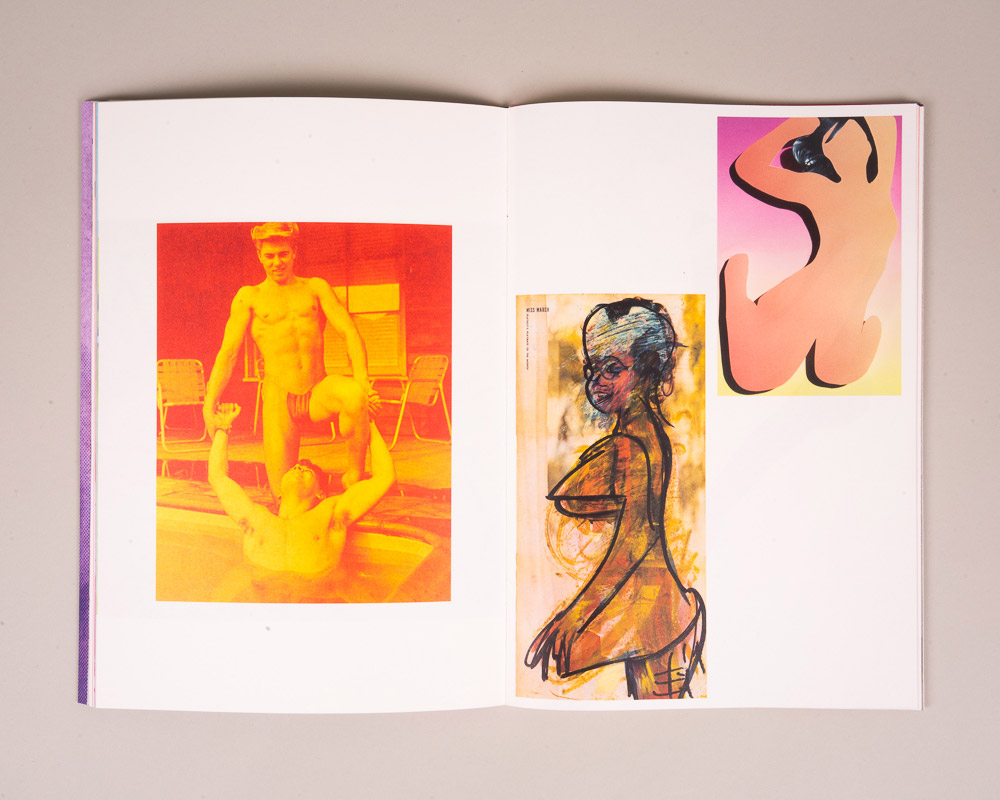 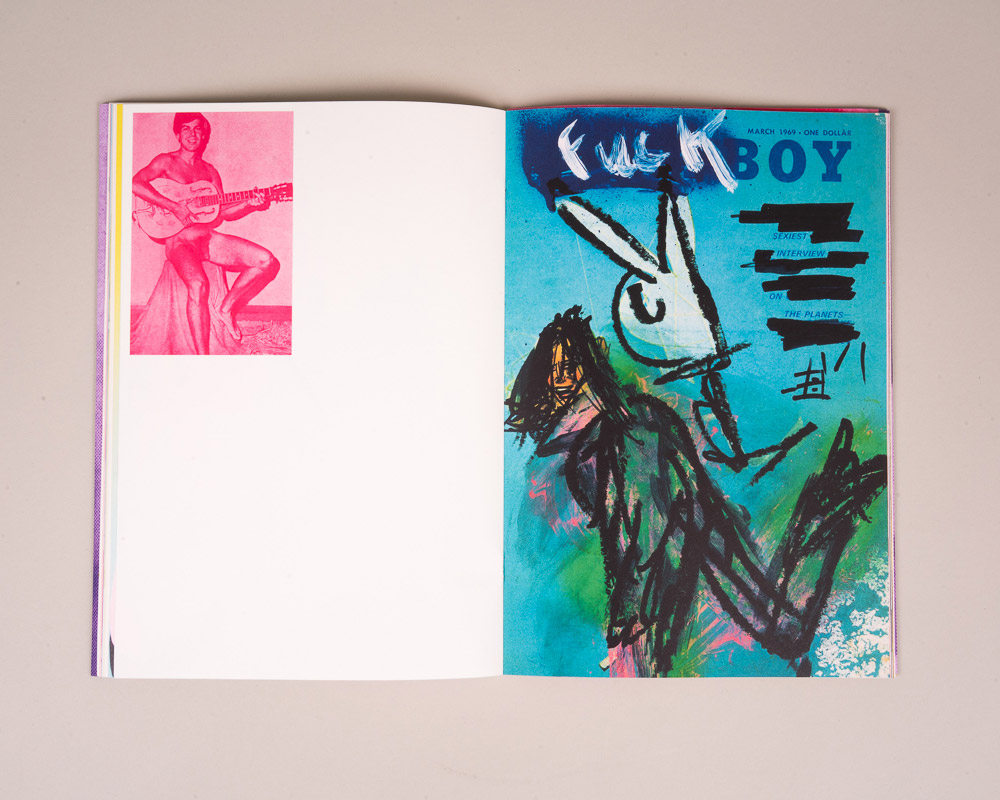 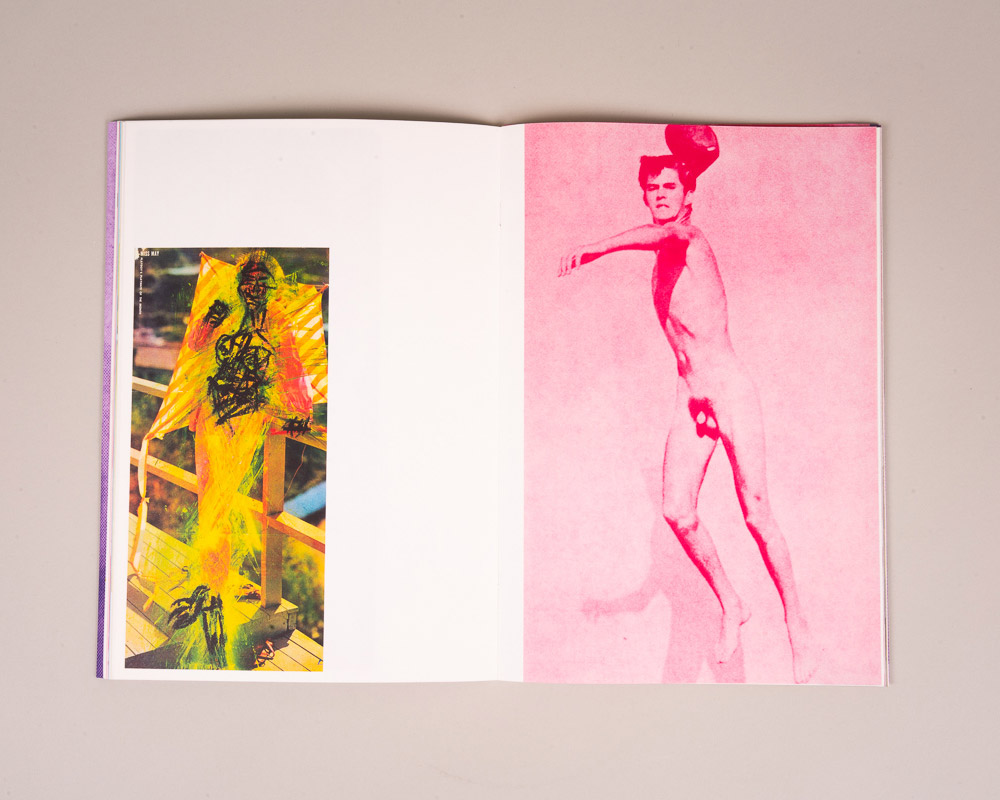 More information about Utopia Centerfolds at Play can be found here

All images courtesy of Convoke.